M.N.: My hypothesis and explanation:

1. Sars-Cov-2 was present in India, just like everywhere else, for quite some time, probably for decades if not longer. It was and is largely asymptomatic, and the populace developed the adequate immunity to it:

Serological surveys – random testing for antibodies – show a majority of people in certain areas of India may have already been exposed to the coronavirus, without developing symptoms. Last week, preliminary findings from a fifth serological study of 28,000 people in India’s capital showed that 56% of residents already have antibodies, though a final report has not yet been published. The numbers were higher in more crowded areas. Last summer, another survey by Mumbai’s health department and a government think tank found that 57% of Mumbai slum-dwellers, and 16% of people in other areas, had antibodies suggesting prior exposure to the coronavirus.

2. Bacteria and viruses compete with each other.

“All of us have pretty good immunity! Look at the average Indian: He or she has probably had malaria at some point in his life, or typhoid or dengue,” says Sayli Udas-Mankikar, an urban policy expert at the Observer Research Foundation in Mumbai. “You end up with basic immunity toward grave diseases.”

“COVID-19 deaths are lower in countries where people are exposed to a diverse range of microbes and bacteria.”

3. It is doubtful that masks make any difference. 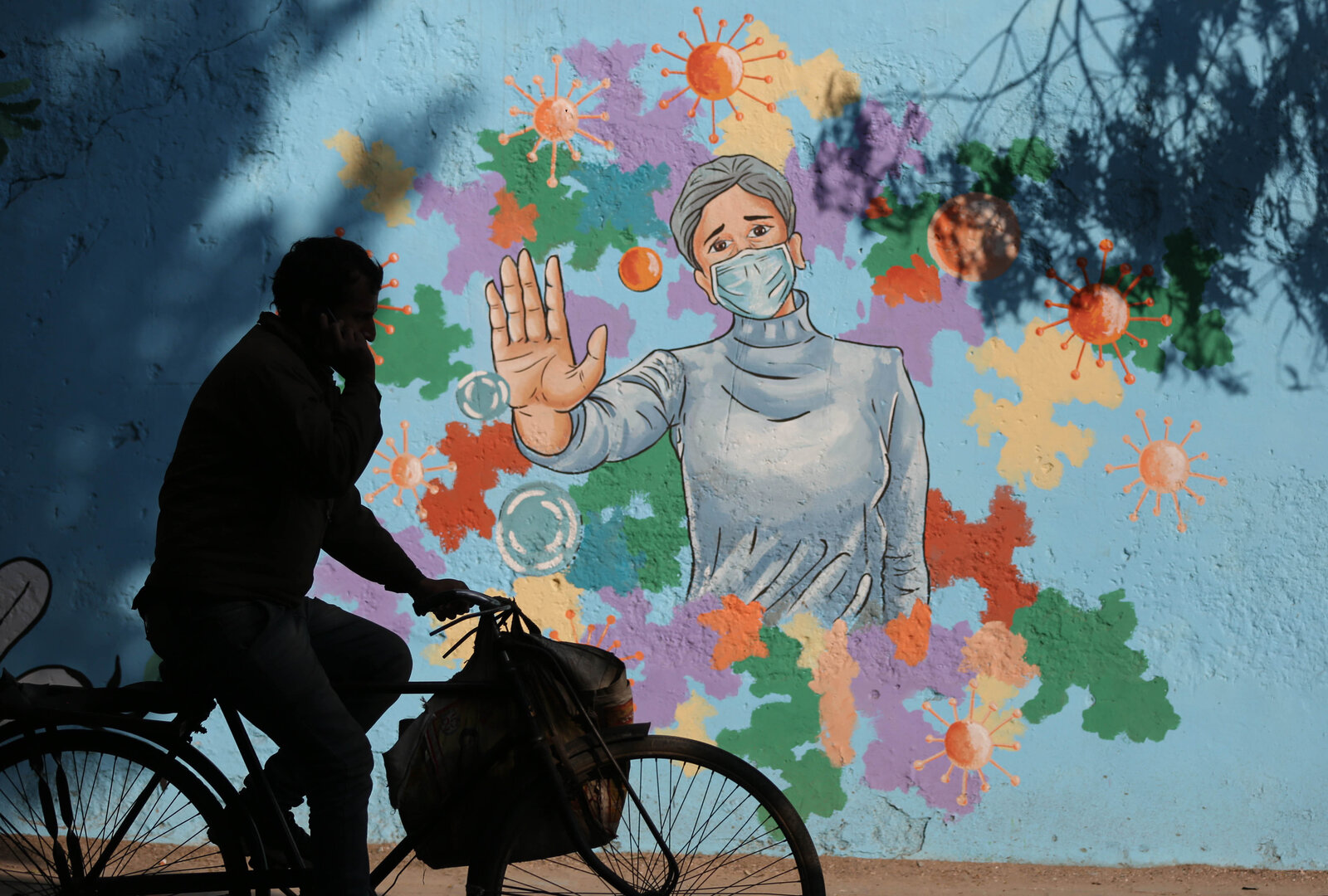 A mural in New Delhi is part of public health messaging in India. The country has seen a dramatic decline in new cases since fall, but researchers aren’t sure why. Sanchit Khanna/Hindustan Times via Getty Images hide caption

A mural in New Delhi is part of public health messaging in India. The country has seen a dramatic decline in new cases since fall, but researchers aren’t sure why.

Last September, India was confirming nearly 100,000 new coronavirus cases a day. It was on track to overtake the United States to become the country with the highest reported COVID-19 caseload in the world. Hospitals were full. The Indian economy nosedived into an unprecedented recession.

But four months later, India’s coronavirus numbers have plummeted. Late last month, on Jan. 26, the country’s Health Ministry confirmed a record low of about 9,100 new cases – in a country of nearly 1.4 billion people. It was India’s lowest daily tally in eight months. On Monday, India confirmed about 11,000 cases.

“It’s not that India is testing less, or things are going underreported,” says Jishnu Das, a health economist at Georgetown University. “It’s been rising, rising — and now suddenly, it’s vanished! I mean, hospital ICU utilization has gone down. Every indicator says the numbers are down.”

Scientists say it’s a mystery. They’re probing why India’s coronavirus numbers have declined so dramatically – and so suddenly, in September and October, months before any vaccinations began.

They’re trying to figure out what Indians may be doing right, and how to mimic that in other countries that are still suffering.

“It’s the million-dollar question. Obviously, the classic public health measures are working: Testing has increased, people are going to hospitals earlier, and deaths have dropped,” says Genevie Fernandes, a public health researcher with the Global Health Governance Program at the University of Edinburgh. “But it’s really still a mystery. It’s very easy to get complacent, especially because many parts of the world are going through second and third waves. We need to be on our guard.”

Scholars are examining India’s mask mandates and public compliance, as well as climate, demographics and patterns of diseases that typically circulate in the country.

India is one of several countries – mostly in Asia, Africa and South America – which have mandated masks in public spaces. Prime Minister Narendra Modi appeared on TV wearing a mask very early in the pandemic. The messaging was clear.

In many Indian municipalities, including the megacity Mumbai, police hand out tickets – fines of 200 rupees ($2.75) – to violators. Mumbai’s mask mandate even applies outdoors, to joggers on the beach and passengers in open-air rickshaws.