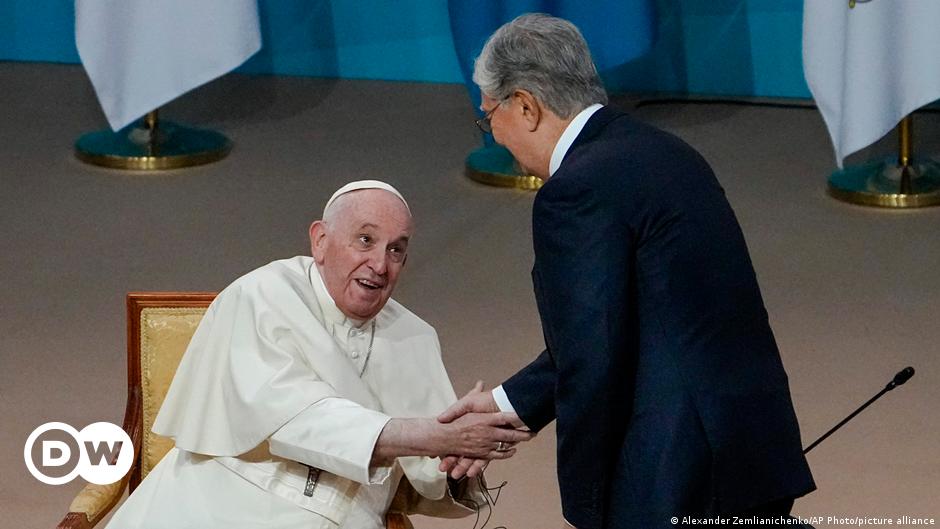 Pope Francis arrived in Kazakhstan on Tuesday to attend an international religious gathering, but said he was also in the country on a “pilgrimage of dialogue and peace.”

Kazakh President Kassym-Jomart Tokayev said it was a “great honor” to welcome the pontiff, who is on his 38th trip abroad since his election in 2013.

Tokayev is an ally of Russia but has refused to support Moscow’s war of aggression in Ukraine. The presence of a significant Russian community in northern Kazakhstan has stoked fears that the Kremlin could have imperial ambitions in the area.

What did the pope say?

“I am visiting you in the course of the senseless and tragic war that broke out with the invasion of Ukraine, even as other conflicts and threats of conflict continue to imperil our times,” said Pope Francis.

“I have come to echo the plea of all those who cry out for peace, which is the essential path to development for our globalized world.”

The pontiff said he was pressing for diplomatic efforts to be expanded to promote dialogue.

“Now is the time to stop intensifying rivalries and reinforcing opposing blocs. We need leaders who, on the international level, can enable people to grow in mutual understanding and dialogue.”

The pope also reaffirmed that Russia is responsible for the war in Ukraine, something that he was previously criticized for not doing when the Russian invasion began.

Traditionally, the pope sends greetings to the capitals of the countries he flies over. However, his flight from Rome to Kazakh capital Nur-Sultan avoided Russian airspace, meaning that he didn’t send one to Russian President Vladimir Putin.

Why is the pope in Kazakhstan?

Pope Francis is visiting Kazakhstan to take part in the Congress of Leaders of World and Traditional Religions, which starts on Wednesday. The two-day meeting involves some 100 delegations from about 50 countries.

The Vatican had hoped that the event might make possible a meeting between the pope and Russian Orthodox Patriarch Kirill of Moscow — a staunch defender of Russia’s war in Ukraine.

However, that will not take place after the Russian religious leader bowed out from making the trip to Kazakhstan.

Kazakhstan, which has a population of some 19 million, is home to a small community of about 125,000 Catholics. Approximately 70% of Kazakhs are Muslim while some 26% are Orthodox Christians.

A simultaneous visit to Kazakhstan by Chinese President Xi Jinping has led to speculation of a possible historic meeting between the two, although there was no indication that this would take place.

The pope has brushed off talk that he is considering stepping down amid health problems that include a bad knee requiring frequent wheelchair use.