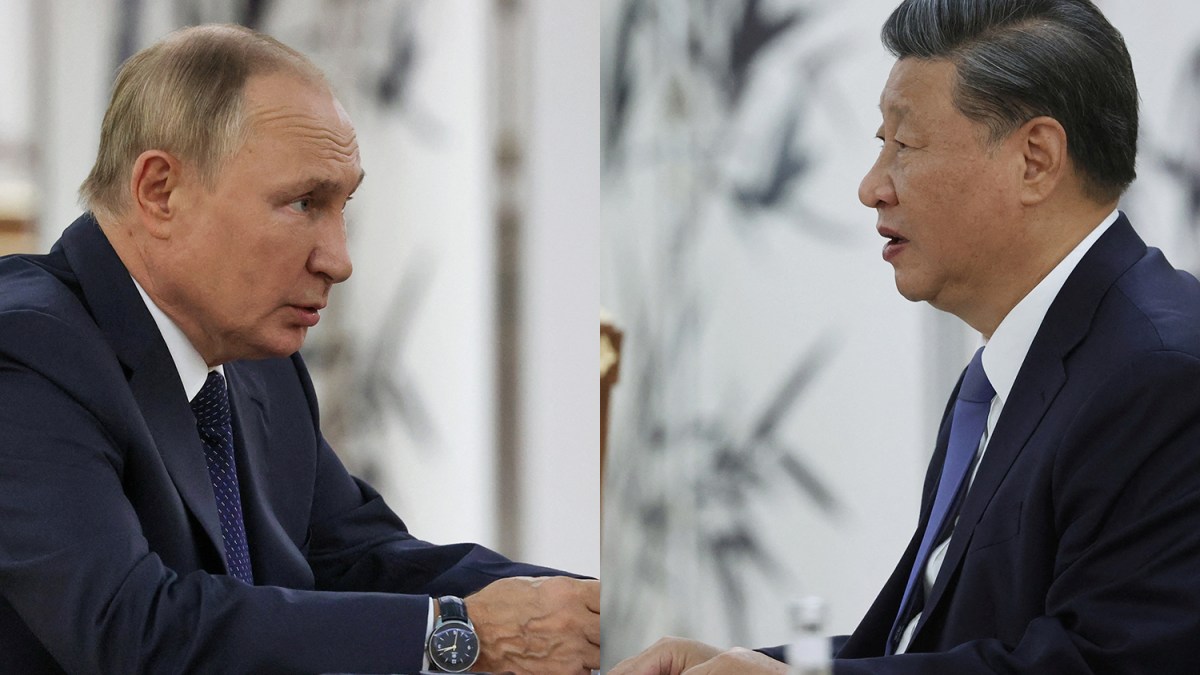 Few recent meetings had been as highly anticipated as the meeting of Russian President Vladimir Putin and Chinese President Xi Jinping at the summit in Samarkand, Uzbekistan, of the Shanghai Cooperation Organization (SCO).

The Russian and Chinese leaders met on Thursday as Putin’s relations with the West continued to unravel over his war on Ukraine and as China’s military harassment of Taiwan seemed set to put Xi on a collision course with Taipei’s United States and European allies – sanctions being hinted as the first point of impact.

The pair had last met in February, promising that the Russia-China relationship would be “without limits”.

On Thursday, Xi called Putin his “old friend”, but the mutually endorsing speeches of the two authoritarian heavyweights were muted.

Putin sat at some distance from Xi, on the opposite sides of two long rounded tables where they were flanked by their delegations. 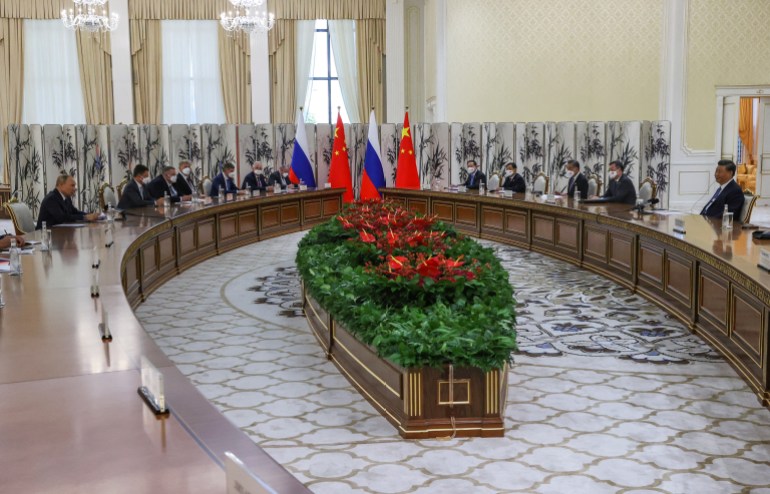 The Russian leader began by blasting those who had attempted to “create a unipolar world”, and expressed appreciation to Xi for “the balanced position of our Chinese friends in connection with the Ukrainian crisis”.

“We understand your questions and concern about this,” Putin added, without explanation, before moving on to condemn Western “provocation” in the Taiwan Strait.

Xi’s surprising response focused on bringing stability and positivity to a world in disarray.

“China is willing to work with Russia to play a leading role in demonstrating the responsibility of major powers, and to instil stability and positive energy into a world in turmoil,” Xi told Putin.

Putin’s encounter with Xi in Samarkand appeared to underscore what analysts said was an increasingly unequal relationship between the two leaders.

Putin’s predicaments – a military quagmire in Ukraine, waves of sanctions on the Russian economy, and growing international isolation – meant that he now came “hat in hand” to meet with China.

And while Putin has emphasised the importance of Asia as an alternative to what he describes as an ailing Western-led political and economic order, the Russian leader’s own place in an Asia-led future is more of a vassal than a visionary leader, the analysts have said.

China has thrown Russia an economic lifeline since the invasion of Ukraine led to sanctions imposed on the Russian economy. But, the disruption has been to the benefit of China too, which has positioned itself as an alternative market for Russian goods, and as a major customer for cheap Russian fuel.

“China and Russia often appear as a pair, two great authoritarian powers seeking to revise the international order. But theirs is not a relationship of equals,” Gabuev said, explaining that Beijing’s dominance in its relationship with Moscow is only likely to grow as the war in Ukraine persists.

Xi and Putin both share a “nostalgic and resentful desire” to see their countries’ grandeur restored, and blame the West for stifling their rise. But Beijing also knows that too much support for Russia could expose it to sanctions.

Yet, too little support for Putin could endanger ties with the leader of a country with whom China shares a more than 4,000-kilometre-long border, and whose economic and trade needs are compatible – cheap Russian fuel and raw materials in exchange for Chinese liquidity, Gabuev said.

Faced with those options, Beijing has sat firmly on the fence when it comes to increasing support for Moscow, while Russia has become increasingly reliant on Beijing for its economic survival.

Putin has few other places to turn than to Asia, said Carlyle Thayer, emeritus professor at the University of New South Wales Canberra, who characterised Putin’s so-called “pivot” to Asia as being spurred more by necessity than virtue.

“Where else is there for Russia to go?” Thayer asked.

Speaking before Putin and Xi’s meeting in Samarkand, Thayer correctly predicted a show of solidarity mixed with criticism of the West as the two leaders glossed over the war in Ukraine and focused on Western military expansionism.

“It will be a triumphalist”, Thayer told Al Jazeera.

“The reality”, however, is that Putin is subservient in the relationship with Xi and he must put “on a brave face” as he aligns with the positions of the Chinese leader.

Expect “a level of Potemkinism” in Samarkand, Thayer said.

‘Not a relationship of equals’

China’s deep reliance on trade with the West means that Beijing will not want to do anything that jeopardises its economy rebuilding after the COVID-19 pandemic, said Seva Gunitsky, associate professor of political science at the University of Toronto.

He described China’s approach to Putin as one where it continues “rhetorical” support for the Russian leader, but is “hedging its bets” on going any further with Moscow.

“It’s not a good time to risk anything to come to the aid of Russia, particularly when Russia is doing so poorly in the war,” Gunitsky told Al Jazeera.

“China has a stake in the outcome of the conflict. If Putin is seen as weak, it will be embarrassing for China,” Gunitsky added.

And while Putin is doing so badly in the conflict, Beijing is not going to “jump in the same pool of fire” with Russia.

Putin’s meeting with Xi followed on the heels of the Chinese military’s participation in extensive exercises with Russian forces. The Vostok 2022 (East 2022) drills were held in Russia’s Far East and the Sea of Japan.

After the war games, Putin then participated in the Eastern Economic Forum in Russia’s Pacific port city of Vladivostok where he lauded Asia’s increasing influence in the world.

“No matter how much someone would like to isolate Russia, it is impossible to do this,” the Russian president told the forum.

A partnership between Russia and the Asia-Pacific region offered “colossal new opportunities for our people”, and economic sanctions on the Russian economy had backfired on the West, he said.

“In an attempt to resist the course of history, West countries are undermining the key pillars of the world economic system, built over centuries,” he said.

But, Asia is rising.

“Irreversible and even tectonic changes have taken place throughout international relations. The role of dynamic, promising countries and regions of the world, primarily the Asia-Pacific region, has significantly increased,” Putin said.

One notable tectonic change in international relations since the invasion of Ukraine has been the price Russia is paid for fuel exports by its new Asian customers.

For liquified natural gas (LNG), China’s imports from Russia rose 26 percent in the first seven months of this year compared with the same period in 2021. China’s coal imports from Russia also jumped to their highest level in at least five years in July.

“China saved about $3bn in buying Russian oil versus other imports between April and July,” Reuters calculated, noting that China paid about $708 per tonne for Russian crude while the value of imports from other importing countries was $816 per tonne.

And while the financial gains for China are obvious, Russia remains more reliant on the trade than China, analysts said.

“It is apparent that Russia can no longer rely on its major energy export markets in Europe for the foreseeable future, and the redirection of its energy and commodity exports towards the East will gather pace,” Tilak Doshi, managing director of Doshi Consulting, told Reuters.

India, too, is reaping the benefits of cheap Russian energy, according to Reuters.

Rarely purchasing Russian oil in the past, India has now become Moscow’s second-largest oil customer after China as Indian refineries have snapped up discounted Russian oil that has been shunned by Western countries.

Bobo Lo, a non-resident fellow at Australia’s think-tank the Lowy Institute, sees the war in Ukraine as exposing the limits of the relationship between China and Russia rather than setting the stage for their expansion.

While some might see an “axis” of authoritarianism developing in the Xi-Putin relationship, Lo wrote of China as being engaged in a “balancing act” when it comes to handling Russia and the “friendship without limits”.

“They cheer-lead on behalf of each other, offering moral and political support to their partner when their interests align. But China and Russia are strategically autonomous actors, whose influence on each other’s behaviour is limited and indirect at best,” Lo said.

And rather than being propelled into a new orbit of cooperation, the long-term outlook for the Russia-China relationship is not promising, he said.

Far from the creation of an “arc of autocracy” in the Asia-Pacific, the Xi and Putin relationship is primarily based on the self-interests of two “strategically autonomous powers” and a fundamental difference is that China is “invested in global order”.

China wishes to play a more dominant role, but it does not wish to “demolish” that order. Putin, however, is focused on “disruptive power” and a “complete overthrow” of the international system.

“That is why Putin has resorted so readily to military force – in Georgia, Syria, Ukraine and, more covertly, in Iraq, Libya, Mali and the Central African Republic,” Lo says.

Russia, but not China, has invested in the value of waging war.

“He [Putin] and those around him identify Russia’s ability and will to wage war as a comparative advantage that few others, apart from the United States, possess,” Lo said.

Putin’s calculations have not gone to plan, however, and the war in Ukraine has rejuvenated the West, which is now more aligned and unified than it has been in decades.

The invasion of Ukraine has also weakened China’s hand on Taiwan, as both US Democrats and Republicans now agree on the need to defend the island, which also means confronting China, Lo said.

As Lo noted, if the US is willing to do so much to defend Ukraine, it would certainly be decisive in its defence of Taiwan.

China can see that Putin has made many missteps in Ukraine, Lo said, where his actions have revealed the Russian president “to be not only vicious, but also acutely fallible”.

Xi, he said, can not be happy with Putin’s tarnishing of the authoritarian “brand” through a failing military campaign that had undermined “authoritarianism’s reputation for efficiency”.

Putin has set a very poor example, he added.

“The Russian invasion of Ukraine has become an anti-modal of how an authoritarian state should pursue its interests.”