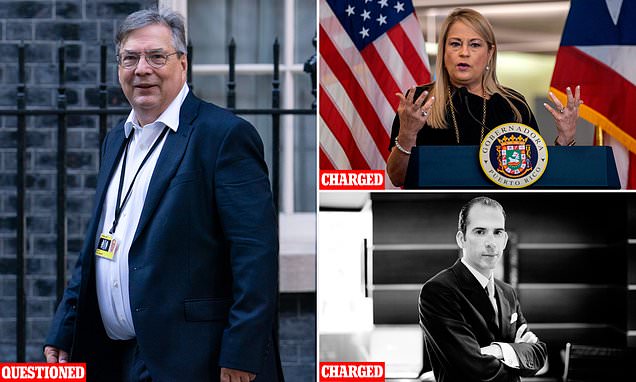 The Downing Street Chief of Staff – one of the most powerful men in Britain – has been interviewed by the FBI over an alleged conspiracy to bribe an American politician and influence an election.

Mark Fullbrook, who is Prime Minister Liz Truss‘s closest advisor, has been spoken to as a witness in a US Department of Justice (DoJ) and FBI investigation involving a London-based businessman accused of bribing a US politician.

Federal agents contacted their counterparts in the UK’s National Crime Agency and Scotland Yard to arrange an interview with the 60-year-old advisor, who previously worked with Brexit-winning Australian election guru Sir Lynton Crosby.

According to the Sunday Times, Fullbrook, who is married to former Tory MP Lorraine Fullbrook, has been co-operating as a witness with the FBI and has retained a top white collar US law firm. Fullbrook strongly denies any wrongdoing.

Fullbrook’s wife was elevated to the House of Lords by former Prime Minister Boris Johnson in 2019.

Chief of Staff Mark Fullbrook, pictured leaving Number 10 on September 7, is co-operating with the FBI concerning an investigation into a Tory party donor who allegedly paid a $300,000 bribe to Puerto Rico’s governor

Fullbrook, who was working for Sir Lynton Crosby’s CT Group at the time of the 2020 campaign, met with Mayfair based Julio Martin Herrera Velutini, who is central to the alleged bribery scandal. US prosecutors claim Herrera channeled the cash through Sir Lynton’s firm

Fullbrook, pictured, strongly denies any wrongdoing and is co-operating with the FBI

Prosecutors claim Mayfair based Herrera Velutini, and former FBI agent, Mark Rossini offered the former governor a $300,000 bribe through Crosby’s company to help with her failed re-election campaign in 2020 – a charge strongly denied by Fullbrook.

Domestically, records held by the Electoral Commission show that a company founded by Herrera has donated £650,604 to the Conservative Party between December 2019 and June 2022.

Federal prosecutors claim Herrera offered the bribe to Vazquez to sack her financial watchdog who was investigating his bank. The Tory party donor wanted to replace the public official with someone of his choosing.

Puerto Rico Governor Wanda Vazquez Garced, pictured, is accused by the FBI of accepting the bribe

Prime Minister Liz Truss appointed Fullbrook to run her successful Downing St campaign and then rewarded him by making him her chief of staff.

Vazquez, Herrera and Rossini have all been charged with conspiracy, federal programs bribery and honest services wire fraud, which, according to the US DoJ could lead to a 20-year jail term in a federal penitentiary upon conviction.

Court records in the United States allege the Puerto Rican cash was paid through CT Group, the Australian-British lobbying firm founded by Sir Lynton Crosbie, who had employed Fullbrook as the company’s chief global project officer.

According to the Sunday Times, prosecutors have received hundreds of emails from Fullbrook relating to his work in the Puerto Rican capital, San Juan.

Fullbrook strongly denies carrying out any work on behalf of Vazquez during her re-election campaign.

Commenting on the investigation, Assistant Attorney General Kenneth A. Polite Jr. said: ‘The alleged bribery scheme rose to the highest levels of the Puerto Rican government, threatening public trust in our electoral processes and institutions of governance.

‘The Department of Justice is committed to holding accountable those who wrongly believe there is one rule of law for the powerful and another for the powerless. No one is above the rule of law.’

US Attorney W. Stephen Muldrow said: ‘The criminal actions of the defendants in this case strike a blow to the heart of our democracy and further erode the confidence of our citizens in their institutions of governance.

‘Our resolve to bring to justice those entrusted by the public to serve with integrity and who violate that trust remains steadfast. Equally steadfast is our resolve to prosecute those who seek to use their wealth and power to enrich themselves at the expense of honest government. I commend the dedication and hard work of the law enforcement personnel and prosecutors in this case, as well as those individuals willing to come forward and cooperate.’

Whitehall insiders, according to the Sunday Times, said the investigation creates ‘countless problems’, with claims that Fullbrook might not be able to secure top-level security clearance.

Following her first court appearance, Vazquez said: ‘I have not committed any crime. They have committed a great injustice by filing these charges.’

Herrera’s attempts to bribe the current governor to end the audit of Bancredito were unsuccessful, authorities say, as his contact allegedly representing the governor was actually acting on behalf of the FBI.

Two others pleaded guilty for their involvement in the scheme in March. Frances Diaz, former president and chief executive officer of Bancredito, conspired with Herrera and others to bribe the current governor, officials say.

Meanwhile, another of Vazquez’s campaign coordinators, John Blakeman, conspired with Herrera and Rossini to bribe Vazquez and with Herrera to bribe her successor, according to the Department of Justice.

The two face up to five years in prison, though their sentencing hearings have not yet been scheduled.

Vazquez, as well as Herrara and Rossini, could face up to 20 years in prison if convicted, U.S. Attorney for the District of Puerto Rico Stephen Muldrow said.

In Vazquez’s first appearance in court, U.S. Magistrate Judge for the District of Puerto Rico Camille Velez-Rive ruled the former governor could be released on $50,000 bail on the condition she hand over her passport.

A representative of Fullbrook said: ‘Our client was not involved in the illegal conduct being alleged and is not being investigated in relation to it.

‘He is merely a witness to it and has and is fully co-operating with the relevant US law enforcement authorities. Any allegation that he is unfit to hold the position of Chief of Staff is wholly untrue.’

The representative stressed that Fullbrook ‘had absolutely no knowledge of any alleged bribery or corruption when CT Group contracted to provide service to Julio Herrerara Velutini.

They also said he did not carry out any work for Vazquez Garced, politician allegedly being bribed.