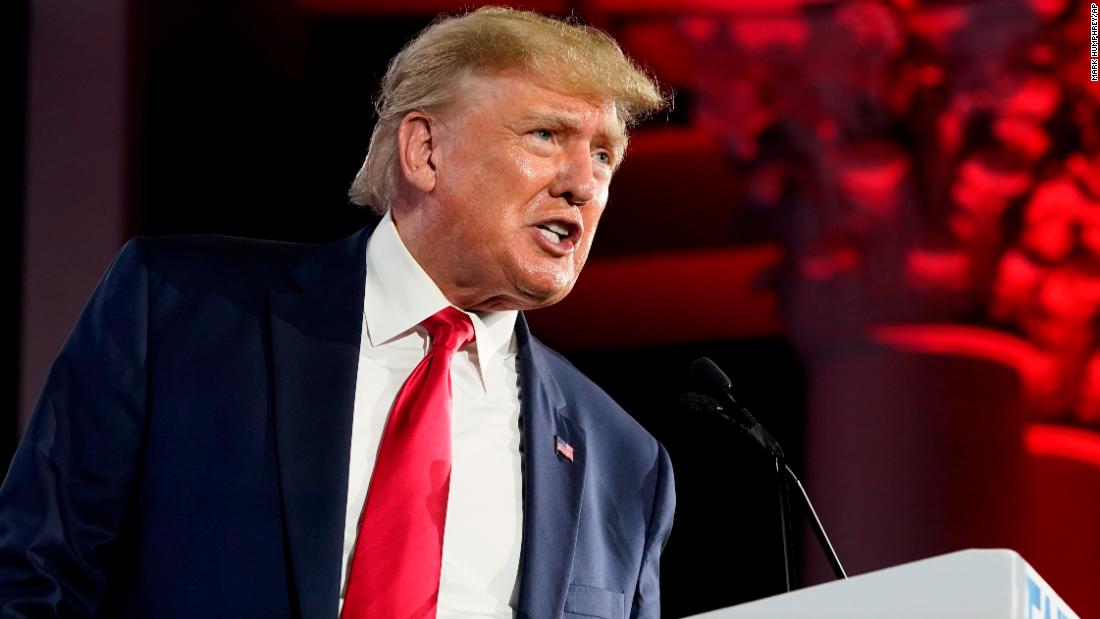 Trump’s lifelong capacity to thwart accountability is now facing its sternest test as investigations and evidence mount against him. Trump has not been charged with any crimes, but the legal and court processes he is a master at delaying and twisting in procedural knots are now making serious headway.

Two huge developments on Wednesday crashed into Trump’s legal teams, which were already fighting off serious investigations on multiple fronts.

Both developments appear to have widened Trump’s potential legal exposure, which now appears stark in at least three separate dramas that include a probe in Georgia into his alleged attempt to steal the 2020 election in the critical swing state. The ex-President has denied wrongdoing on all accounts.

But the deepening crisis for Trump also came on a day when the House select committee investigating the January 6, 2021, insurrection formally announced its first fall hearing for next week. The panel has yet to decide whether to make a recommendation for criminal action against the former President. The Justice Department already has its own separate grand jury probe into events surrounding his false election fraud claims and those leading up to the attack on the US Capital by his mob of supporters.

The darkening legal storm for Trump also bolsters the extraordinary possibility of a former President facing potential criminal action and serious civil penalties that could significantly threaten his fortune. Much of Trump’s initial political appeal is based on the idea that he is a wildly successful tycoon who built a hugely profitable business and amassed personal wealth. If it is proven that it is all a scam and that his career is a house of cards built on illegal acts, his narrative will absorb a serious hit — although it’s unlikely that would ever be enough to shake his appeal to his core voters.

The latest legal rebukes of Trump come as he considers a likely 2024 presidential campaign, which he has already signaled would be constructed on his claim that he is being politically persecuted by Democrats, and has already implicitly warned of violence if he is formally indicted.

The civil suit filed by New York state against Trump represents the broadest catalogue yet of the former President’s business practices and also targets three of his adult children — Don Jr., Ivanka and Eric, who are deeply involved in the Trump Organization.

It alleges a staggering pattern of overvaluing of properties and assets across Trump’s real estate portfolio, his hotel and golf club empires. The purported aim of the multiple schemes was to deceive lenders, insurance brokers and tax authorities to give him better loan conditions and to lower his tax liability. James alleged that each certification was personally signed off by Trump and that he played a direct role in falsifying valuations. In one case in her claim, James said that Trump inflated the size of his Trump Tower apartment from less than 11,000 square feet to more than 30,000 square feet to arrive at a value of $327 million. In another case, she claimed that Trump repeatedly inflated the value of an office building the organization owns at 40 Wall Street.

“It is an enormous complaint, it is a robust complaint, it is filled with facts and it is very serious. And so Donald Trump and others named in the complaint are going to have their day in court to respond to this and try and seek to challenge it,” Geoffrey Berman, a former US attorney for the Southern District of New York, told CNN’s Erin Burnett.

James said that any regular citizen who had allegedly committed such acts would have the book thrown at them. She argued that not pursuing the case would mean there would be two justice systems, one for working people and one for the rich and the powerful.

“There cannot be different rules for different people in this country or this state,” James said.

Her remarks took direct aim at the conceit behind Trump’s entire political narrative — that he’s an outsider fighting for everyday Americans against a system that favors elites.

The penalties that James is seeking against Trump in what is likely to be a protracted case have the potential to at the very least severely limit the capacity of the business to operate, especially in the US financial capital.

“She is seeking what corporate lawyers call the corporate death penalty, which would be decertification of the Trump Organization so they couldn’t even do business in New York anymore,” CNN legal analyst Paul Callan told Anderson Cooper.

“It’s a very, very serious penalty if the AG wins the suit.”

In a sign that Trump’s defense could be an uphill task, James said that he repeatedly invoked his Fifth Amendment right against self-incrimination. In a civil case, as opposed to a criminal one, prosecutors have the right to ascribe an adverse inference to such a step.

James, a Democrat, went out of her way to insist that there was no political motivation behind her case and that other corporations had faced similar censure.

But James has created some openings for Trump to accuse her of political bias. She had publicly said before taking office that she believed that the then-President could be indicted. And the almost taunting use of Trump’s slogan in her presentation unveiling the lawsuit did appear somewhat triumphalist. “Claiming money that you do not have does not amount to the ‘art of the deal,'” she said. “It’s the art of the steal.”

Trump quickly responded to the lawsuit by calling it a witchhunt — his well-worn tactic of dismissing any attempt to force him to face accountability. Trump may try to argue that his business was adopting the same business practices as others in New York and that he is being unfairly singled out as a former President and potential future candidate.

Still, the evidence unveiled in the lawsuit could spiral in unexpected directions in other jurisdictions — even if it does not result in a criminal case against the Trump Organization — that could threaten the business’ financial viability.

Another blow in the classified documents case

The Justice Department’s victory in the 11th Circuit represents another legal blow to Trump because it targets the idea that he’s immune from rules pertaining to classified information.

The appeals court did not just partially stay a lower court’s ruling to halt the DOJ’s review of 100 classified documents taken from Mar-a-Lago, which officials say are government property and could expose US intelligence sources and methods and even put covert US assets at risk overseas. The ruling also obliterated the argument of the Trump legal team that the former President may have declassified the documents as president.

Nick Akerman, a former assistant US attorney for the Southern District of New York, said on CNN Wednesday that the 11th Circuit gutted Trump’s case, expressing doubt that that the Supreme Court would take the case up if it got that far.

“Donald Trump had no proper interest in classified documents; there is no way he ever has the right to get this information or see it. That really is the underlying basis of this whole opinion,” he said.

As always, when Trump faces a legal threat, the question arises whether he will face a political price.

The former President has spent years seeking to discredit any institution, including the courts, that takes him on. He bashes them as biased, corrupt and a tool of liberal persecution. He has also specifically targeted James, accusing her of racism against him. Such demagoguery is now a critical tool of his political brand. At rallies, he tells supporters that he is willing to be persecuted to shield them.

There is little chance the former President’s base will turn on him. Still, yet more damaging allegations of Trump’s behavior are unlikely to help his already diminished standing with general election voters who voted him out of office in 2020. And the pressure of yet another serious legal threat cannot help but weigh on his mind as he contemplates another White House run.

However, the reality that sitting presidents enjoy protections against criminal action may appear even more attractive to Trump now. And if he doesn’t run in 2024, it would make it more difficult for the former President to claim he is being politically victimized.