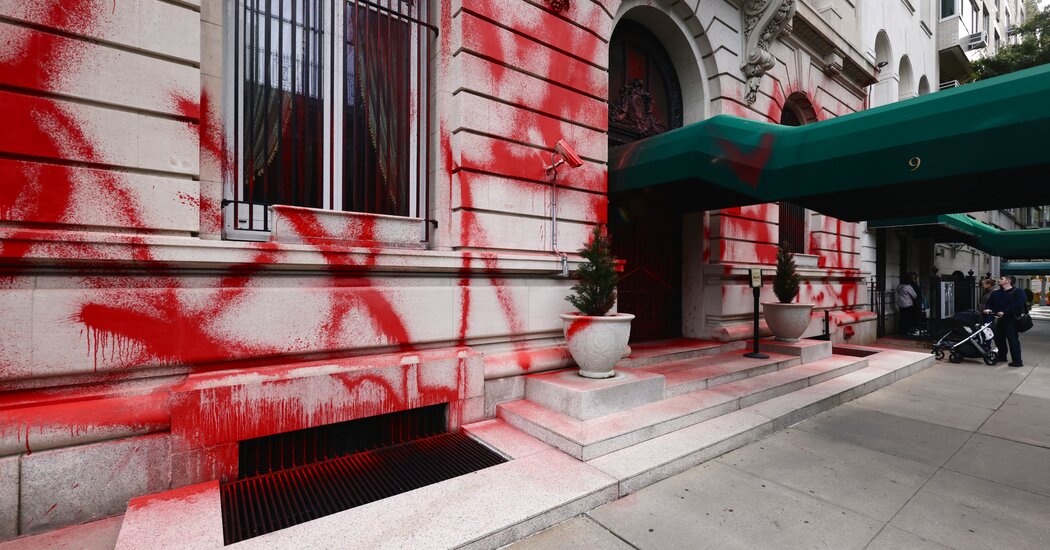 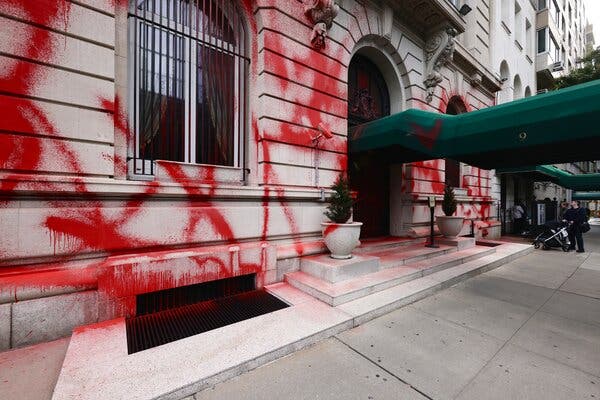 The Russian consulate in Manhattan was vandalized on Friday, according to the police.Credit…Jeenah Moon for The New York Times

By Karen Zraick and Mable Chan

The Russian Consulate in New York was vandalized with spray paint early Friday morning, according to the police.

Officers responded to a 911 call about vandalism on the facade of the building, located on East 91st Street, just off Fifth Avenue, at about 1:30 a.m. on Friday, the police said.

No words were visible, just wide streaks of red paint sprawled across the ground floor facade of the building, covering windows and a set of double doors. But some on social media and a few people passing by interpreted the vandalism to be a protest of Russia’s ongoing war against Ukraine.

The vandalism appeared just hours before President Vladimir V. Putin of Russia gave a belligerent speech in Moscow about the annexation of four regions in Ukraine.

Some of the people who stopped in front of the consulate on Friday morning expressed their support for Ukraine.

Maria Phillips, 39, who was born in what was then the Soviet Union and now lives is London, took photos of the scene.

“I feel moved by it,” she said. “It obviously stands for blood, which Russia is responsible for, killing Ukrainian people and sending people to die in the war, which is pointless and cruel and stupid.”

Marina Kovalenko, 57, a personal trainer who lives nearby, saw photos of the paint on social media and hurried over to catch a glimpse. To her, it was a work of art, and she commended the vandals and offered to bail them out if they were caught.

There have been no arrests, and the episode was deemed a possible bias incident, the police said.

“I always was thinking to spray the flag, but I’m short,” Ms. Kovalenko joked. “And I know it’s criminal.”

She said she moved to the United States from Russia 11 years ago, but her family remained there. She added that she thought the paint should remain until Russia’s government changed course.

“I wish I was brave enough to do it myself,” she said.

Julia Krushelnysky, a Ukrainian American senior at the Spence School across the street from the consulate, teared up as she surveyed the scene. She said it had been very difficult for her to attend school daily as the war grinds on.

“It’s very emotional to have this very visual representation of the Russian consulate every day, something a little bit tough for me,” she said.

The Russian consulate referred questions about the incident to the U.S. State Department, which did not immediately respond to a request for comment. A sign on the consulate’s door said all appointments were canceled for the day.