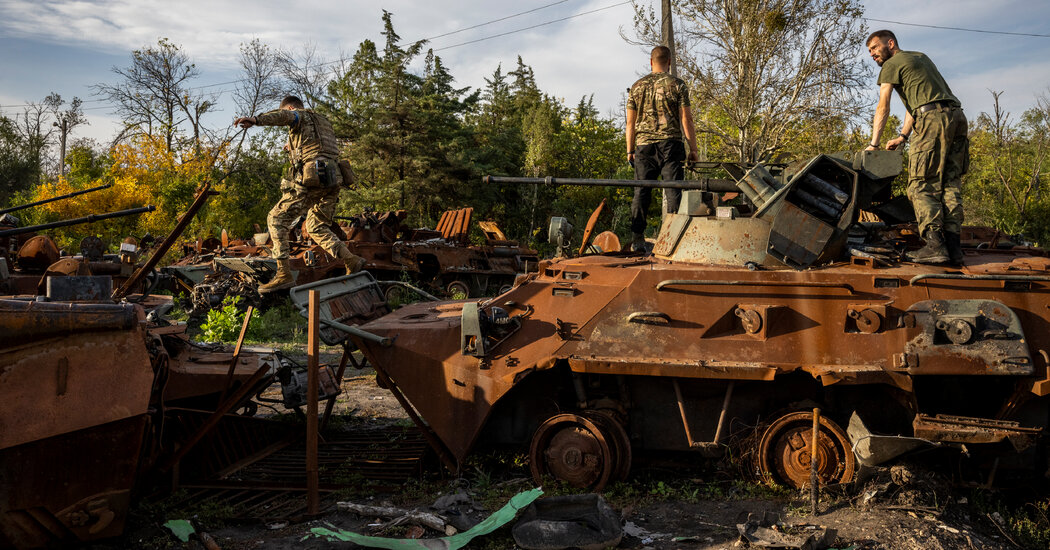 Zelensky says Russian retreat is a sign of Russia’s weak position in east.

President Volodymyr Zelensky of Ukraine quickly sought to politically capitalize on the Russian retreat from the crucial rail hub of Lyman in eastern Ukraine on Saturday.

In his nightly address, Mr. Zelensky said that his army’s advance showed that Moscow’s attempt to illegally annex much of the country after staged referendums was an “absolute farce.”

On Friday, the Russian president, Vladimir V. Putin, announced that the four occupied provinces of Ukraine, including Donetsk Province, where Lyman is, would be absorbed into Russia and that its people would be Russian citizens “forever.”

Mr. Putin claimed the residents in those provinces had voted overwhelmingly to join the Russian Federation, but Ukraine and its Western allies dismissed the referendums as shams, as most of the citizens had fled the region and many of those left behind were forced to cast ballots at gunpoint.

In his speech, Mr. Zelensky said Moscow’s propagandists had filmed a “pseudo-referendum” in the Donbas — the mineral-rich region in the Donetsk and Luhansk Provinces that Russia now claims to control.

“Russia has staged a farce in Donbas. An absolute farce, which it wanted to present as an alleged referendum,” he said, adding that “now a Ukrainian flag is there.”

He then vowed that there would be more Ukrainian flags flying over the Donbas during the coming week as Kyiv’s counteroffensive inches forward.

“The Ukrainian flag is already in Lyman,” he said. “Fighting is still going on there, but there is no trace of any pseudo-referendum.”

“Our flag will be everywhere,” he said.

There was no public comment on Saturday from Mr. Putin or his spokesman about the Russian army’s retreat, even as pro-war commentators and two of Mr. Putin’s closest allies sharply criticized the Defense Ministry for retreating from the city.

The spokesman for the Defense Ministry, Igor Konashenkov, told the Russian state news agency Tass that the troops in Lyman had made a tactical retreat to avoid being encircled and trapped. He said the Ukrainian forces had “significant superiority” in numbers and the Russians had withdrawn “to more advantageous lines.”