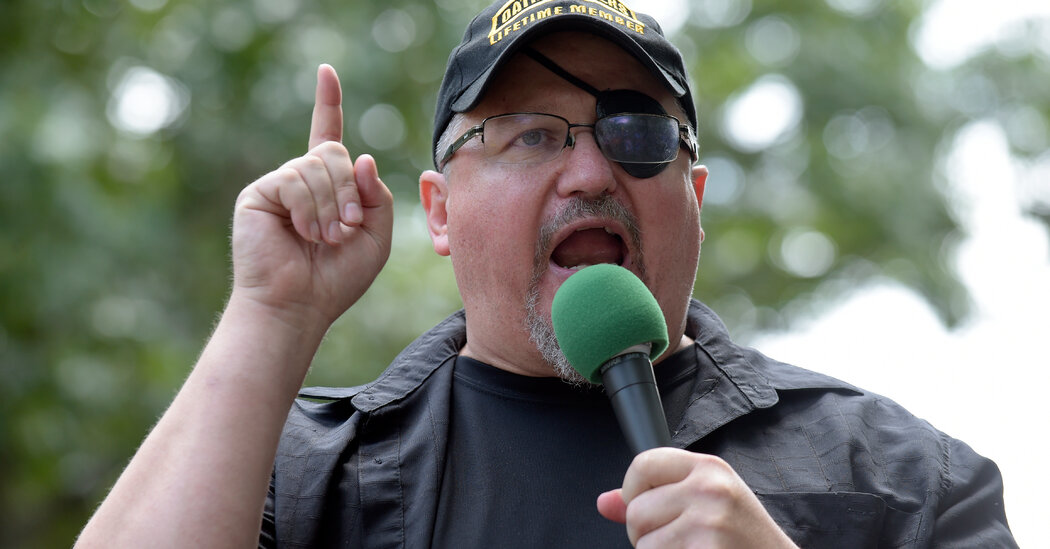 Defense lawyers said the far-right militia had assembled ahead of the Jan. 6 attack on the Capitol to await what they hoped would be a decision by Donald Trump to invoke the Insurrection Act. 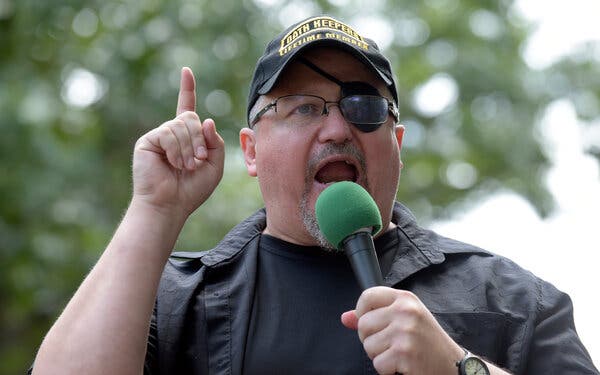 Stewart Rhodes, the leader of the Oath Keepers militia, is facing a charge of seditious conspiracy.Credit…Susan Walsh/Associated Press

WASHINGTON — Two days after Election Day in 2020, Stewart Rhodes, the leader of the Oath Keepers militia, sent an urgent, encrypted message to high-ranking members of his group, telling them to resist allowing Joseph R. Biden Jr. to enter the White House.

“We aren’t getting through this without a civil war,” he wrote.

Setting out their opening statement in the trial of Mr. Rhodes and four other members of the Oath Keepers on charges of seditious conspiracy, federal prosecutors said on Monday that the message was an early step in a broad effort to stop the transfer of presidential power and to use the might of the far-right militia to keep President Donald J. Trump in office.

Over the next two months, Mr. Rhodes riled up and recruited dozens of Oath Keepers to join his plot, prosecutors said, eventually deploying them in Washington and across the river in Virginia to disrupt a key moment of the democratic process: the certification of Mr. Biden’s victory at a joint session of Congress on Jan. 6, 2021.

“Ever since our government transferred power from George Washington to John Adams in the year 1797, we have had a core custom of routine and peaceful transfer of power,” Jeffrey S. Nestler, a prosecutor, said in Federal District Court in Washington.

“These defendants tried to change that history,” Mr. Nestler went on. “They concocted a plan for an armed rebellion to shatter a bedrock of democracy.”

In his own opening statement, Phillip Linder, Mr. Rhodes’s lawyer, said Mr. Rhodes and his subordinates had never planned an attack against the government on Jan. 6. Instead, Mr. Linder said, the Oath Keepers were waiting for Mr. Trump to invoke the Insurrection Act — a move, they claim, that would have given the group standing as a militia to employ force of arms in support of Mr. Trump.

Calling the Oath Keepers a “peacekeeping force,” Mr. Linder also argued that the group did not go to Washington on Jan. 6 to storm the Capitol but to provide security at political rallies for speakers and dignitaries, like Roger J. Stone Jr., Mr. Trump’s longtime political adviser.

“Even though it may look inflammatory,” Mr. Linder told the jury, “they did nothing illegal.”

Mr. Rhodes and his four followers are the first defendants in the sprawling investigation of the Capitol attack to face trial on charges of seditious conspiracy, a crime that traces back to the Union’s efforts to protect the federal government against secessionist rebels during the Civil War.

The proceeding, which is expected to last four to six weeks, will be both a primer on the inner workings of the Oath Keepers and a kind of test case for the sedition conspiracy charge. That is the most serious count the government has brought so far against any of the nearly 900 people charged in the Capitol assault.

During the trial, prosecutors intend to use Mr. Rhodes’s own words — in virtual meetings, letters to his members and encrypted text messages — to show how he fiercely opposed Mr. Biden’s victory in November and became increasingly convinced of the Oath Keepers’ role in keeping Mr. Trump in power.

The conspiracy, Mr. Nestler said, culminated on Jan. 6 when more than a dozen members of the Oath Keepers advanced in military-style “stacks” into the Capitol itself — with some moving off in search of Speaker Nancy Pelosi. Other members, Mr. Nestler added, were stationed as a “quick reaction force” at the Comfort Inn Hotel in Arlington County, Va. — across the Potomac River from Washington — in case things went wrong.

How Times reporters cover politics. We rely on our journalists to be independent observers. So while Times staff members may vote, they are not allowed to endorse or campaign for candidates or political causes. This includes participating in marches or rallies in support of a movement or giving money to, or raising money for, any political candidate or election cause.

Another key aspect of the trial will be the Oath Keepers’ relationship to Mr. Trump, a man they often supported as president despite their traditional antigovernment beliefs. The group, which was founded during the Obama administration to oppose what it saw as an overreaching government, mobilized to defend presidential power once Mr. Trump assumed office and embraced the deep-state conspiracy theories that marked his new administration.

Because of the nature of the Oath Keepers’ defense — and because of the government’s wealth of evidence — the trial is less likely to focus on disputes over what the group did in the days and weeks leading up to Jan. 6 than it is to hinge on the question of why they did it.

The government contends that Mr. Rhodes and his four co-defendants — Kelly Meggs, Kenneth Harrelson, Jessica Watkins and Thomas Caldwell — willingly planned to use force against the government and carried out their attack even though Mr. Trump never did invoke the Insurrection Act.

The defense maintains that the Oath Keepers could not have seditiously sought to stop the transfer of power because they believed that the Insurrection Act would allow them to legally come to Mr. Trump’s aid. The group was primarily concerned with potential violence by counterprotesters and instituted the so-called quick reaction force to prevent attacks from leftist activists like antifa, David Fischer, Mr. Caldwell’s lawyer, told the jury.

“This is the biggest bait and switch in the history of the American justice system,” Mr. Caldwell said.

While the seditious conspiracy statute generally bars plots to overthrow the government, Mr. Rhodes and co-defendants have been accused of using force to block the execution of federal law — in this case, the 12th Amendment and the Electoral Count Act of 1887, both of which govern the transfer of presidential power.

The five defendants have also been charged with two other conspiracy counts. One accuses them of plotting to disrupt the election certification process on Jan. 6. The other charges them with plotting to prevent federal officers from discharging their duties that day.

Mr. Rhodes, a former Army paratrooper who wears a black eye patch — the result of a gun accident — is by far the best known member of the Oath Keepers. But during opening statements, some of his co-defendants’ lawyers sought to humanize their clients by telling the jury a little about them.

Mr. Fischer, for example, said Mr. Caldwell was a former naval officer with lingering injuries from his military service. Ms. Watkins’s lawyer, Jonathan Crisp, explained that she was a former Army Ranger and a transgender woman who had repeatedly struggled to fit in with the Oath Keepers. Lawyers for Mr. Meggs and Mr. Harrelson chose not to offer opening statements to the jury.

Much of the evidence the government plans to introduce has been disclosed over the past several months in court filings and hearings — including details such as a patch Mr. Meggs wore on Jan. 6 with a slogan: “I don’t believe in anything. I’m just here for the violence.”

Whatever new evidence emerges at the trial will likely come through the testimony of cooperating witnesses from inside the Oath Keepers, at least three of whom have already pleaded guilty to sedition charges. Mr. Rhodes is also expected to testify, Mr. Linder said.

One of the government’s witnesses was with Mr. Rhodes on Jan. 10, 2021. On that day, Mr. Nestler said, the Oath Keepers’ leaders met with an unnamed person, whom Mr. Rhodes asked to convey a message to Mr. Trump, explaining that the fight to keep the White House was not over.

The witness recorded the meeting, and Mr. Rhodes could be heard complaining that the rioters at the Capitol did not have weapons.

“My only regret is that they should have brought rifles,” Mr. Rhodes said, adding, “We could have fixed it right there and then.”