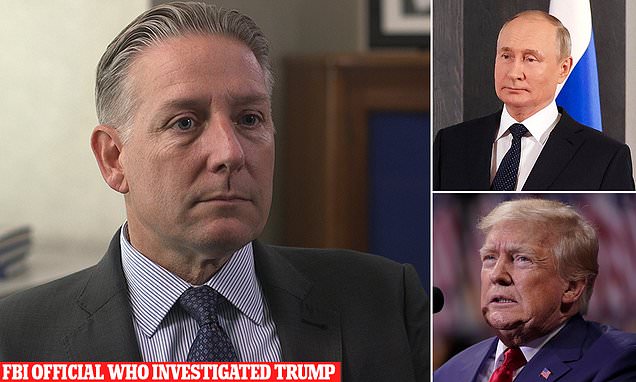 A senior FBI official who investigated Donald Trump‘s alleged links to Russia is now under the microscope for his own Moscow ties, a bombshell new report revealed on Thursday.

He has not been charged with any crimes, Insider reports.

But if McGonigal’s work with Russian oligarch Oleg Deripaska proves to have violated the Foreign Agents Registration Act, he could face up to five years in prison and a $250,000 fine at most.

Deripaska, a close ally of Vladimir Putin’s, was also a close contact of Trump 2016 campaign chair Paul Manafort and is thought to have played a leading role in the Kremlin’s efforts to interfere in that presidential race.

He and business tied to him were sanctioned by the Treasury Department for ‘malign activity’ and ‘attempting to subvert western democracies, and malicious cyber-activities.’

McGonigal’s links to Deripaska are reportedly at the heart of a grand jury subpoena that was issued in secret in November 2021.

It’s not clear if the investigation is still ongoing.

But the explosive Thursday report suggests McGonigal has had multiple contacts with an aide to Deripaska, including a referral to a law firm that ended up being a lucrative deal for a former Soviet official.

That former official is Sergey Shestakov, who now lives in the US but is said to be the ex-chief of staff to the Soviet Union’s ambassador.

Shestakov reportedly disclosed in a filing that McGonigal was key to helping him ‘facilitate’ a meeting between Deripaska’s aide and a shady consulting company called Spectrum Risk Solutions.

It’s not clear what role Shestakov played in the referral but he claimed to have received $33,000 for it.

It’s also not clear if McGonigal’s work with Deripaska breaks any laws, though longtime intelligence community journalist Tim Weiner told Insider, ‘If McGonigal is mixed up in any way shape or form with Deripaska, that strikes me as unseemly, to put it politely.’

McGonigal is reportedly linked to Russian billionaire Oleg Deripaska, who is a close ally of Vladimir Putin (pictured)

McGonigal didn’t respond to Insider’s request for comment, while Kobre & Kim refused to provide a statement.

A senior FBI official suggested to the outlet that McGonigal’s probing by a grand jury is in itself extraordinary.

‘It’s very rare that former FBI people at all, and certainly former senior FBI people, wind up as grand-jury targets,’ they said.

He was reportedly one of the first federal law enforcement officers to find out that a Trump 2016 campaign staffer bragged about Russians having damaging information on Hillary Clinton, which sparked the infamous Trump-Russia probe known as Crossfire Hurricane.

At the time, McGonigal headed the cybercrimes division at the FBI’s Washington HQ.