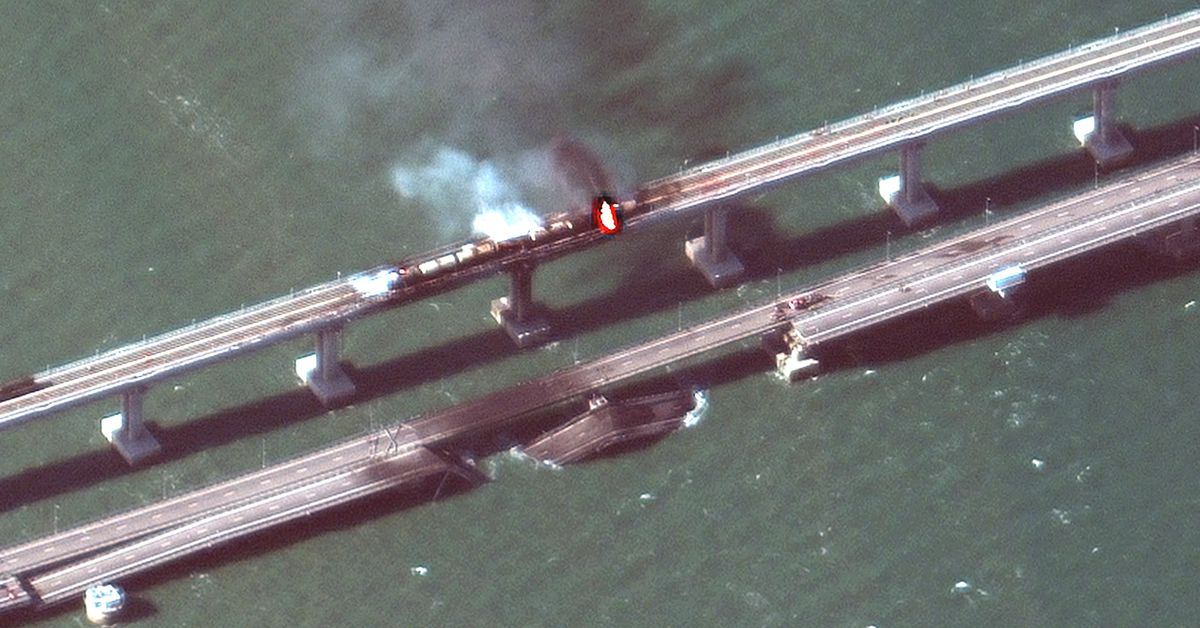 KYIV, Oct 8 (Reuters) – A powerful blast damaged Russia’s road-and-rail bridge to Crimea on Saturday, hitting a prestigious symbol of Moscow’s annexation of the peninsula and the key supply route to forces battling to hold territory captured in southern Ukraine.

The early morning explosion on the bridge over the Kerch Strait, for which Russia did not immediately assign blame, prompted gleeful messages from Ukrainian officials but no claim of responsibility.

President Vladimir Putin signed a decree instructing tighter security for the bridge as well as the infrastructure supplying electricity and natural gas to the peninsula.

He also ordered a commission be set up to investigate.

Russian officials said three people had been killed, probably the occupants of a car travelling near a truck that blew up. Seven fuel tanker wagons on a 59-wagon train heading for the peninsula on the bridge’s upper level also caught fire.

Divers are to start examining the damage at 6 a.m. local time (0300 GMT) on Sunday and a more detailed survey above the waterline should be completed by the end of the day, they quoted him as saying.

Russia seized Crimea from Ukraine in 2014 and the 19-km (12-mile) Crimean Bridge linking it to Russia’s transport network was opened with great fanfare four years later by Putin.

It is a major artery for Russian forces who control most of southern Ukraine’s Kherson region, and for the Russian naval port of Sevastopol, whose governor told locals: “Keep calm. Don’t panic.”

It was not yet clear if the blast was a deliberate attack, but the damage to such high-profile infrastructure came as Russia has suffered several battlefield defeats and could further cloud Kremlin messages of reassurance that the conflict is going to plan.

“The situation is manageable – it’s unpleasant, but not fatal,” Crimea’s Russian governor Sergei Aksyonov told reporters. “Of course, emotions have been triggered, and there is a healthy desire to seek revenge.”

He earlier said the peninsula had a month’s worth of fuel and more than two months’ worth of food.

The blast took place a day after Putin’s 70th birthday, and coincided with the naming of Air Force General Sergei Surovikin, Russia’s third senior military appointment in a week, to take charge of the invasion effort.

Ukrainian President Volodymyr Zelenskiy did not refer to the blast in a video address on Saturday, saying merely that the weather in Crimea was cloudy.

“But however cloudy it is, Ukrainians know … our future is sunny. This is a future without occupiers, across our territory, particularly in Crimea,” he said.

A satellite image shows a close up view of smoke rising from a fire on the Kerch bridge in the Kerch Strait, Crimea, October 8, 2022. Maxar Technologies/Handout via REUTERS

The head of Ukraine’s National Security and Defence Council posted a video of the bridge on social media alongside a video of Marilyn Monroe singing “Happy birthday, Mr President”.

Since the war started on Feb. 24, Ukrainian officials have regularly suggested they want to destroy the bridge. Ukraine’s postal service said it would print a special stamp.

Zelenskiy advisor Mykhailo Podolyak said the fact the truck was travelling from Russia showed the blast had been arranged by Russian operators.

“Undoubtedly, we are witnessing the beginning of large-scale negative processes in Russia,” he said in a commentary, blaming infighting among Putin’s circle.

Earlier, he tweeted the incident was just “the beginning”.

The Transport Ministry said road traffic for light vehicles and buses had resumed in alternating directions on the intact half of the roadway. Goods vehicles were being referred to a ferry service.

The Russian National Anti-Terrorism Committee said a freight truck had blown up on the bridge’s roadway at 6:07 a.m. (0307 GMT). It said two spans of road bridge had partially collapsed, but that the arch spanning the channel through which ships travel between the Black Sea and Azov Sea was not damaged.

Images showed one half of the roadway blown away, and the other half still attached.

Moscow has presented largely Russian-speaking Crimea as a historic part of Russia and, especially this year, one where its citizens could holiday.

Kirill Stremousov, the Russian-installed deputy administrator of the Kherson region, said the blast “will not affect army supply very much”.

“But there will be problems with logistics for Crimea,” he added in a social media post.

Mykola Bielieskov of the Ukrainian Institute of Strategic Studies, which advises the presidency in Kyiv, said the bridge was irreplaceable for Russia’s forces.

Although troops have seized a stretch of coastal Ukraine linking the Kherson region and Crimea to Russia, Bielieskov said transport connections were poor, and that Russia preferred to send reinforcements to Kherson along the more circuitous route of the bridge.

James Nixey of the British-based Chatham House think tank said: “Conceivably the Russians can rebuild it, but they can’t defend it while losing a war.”