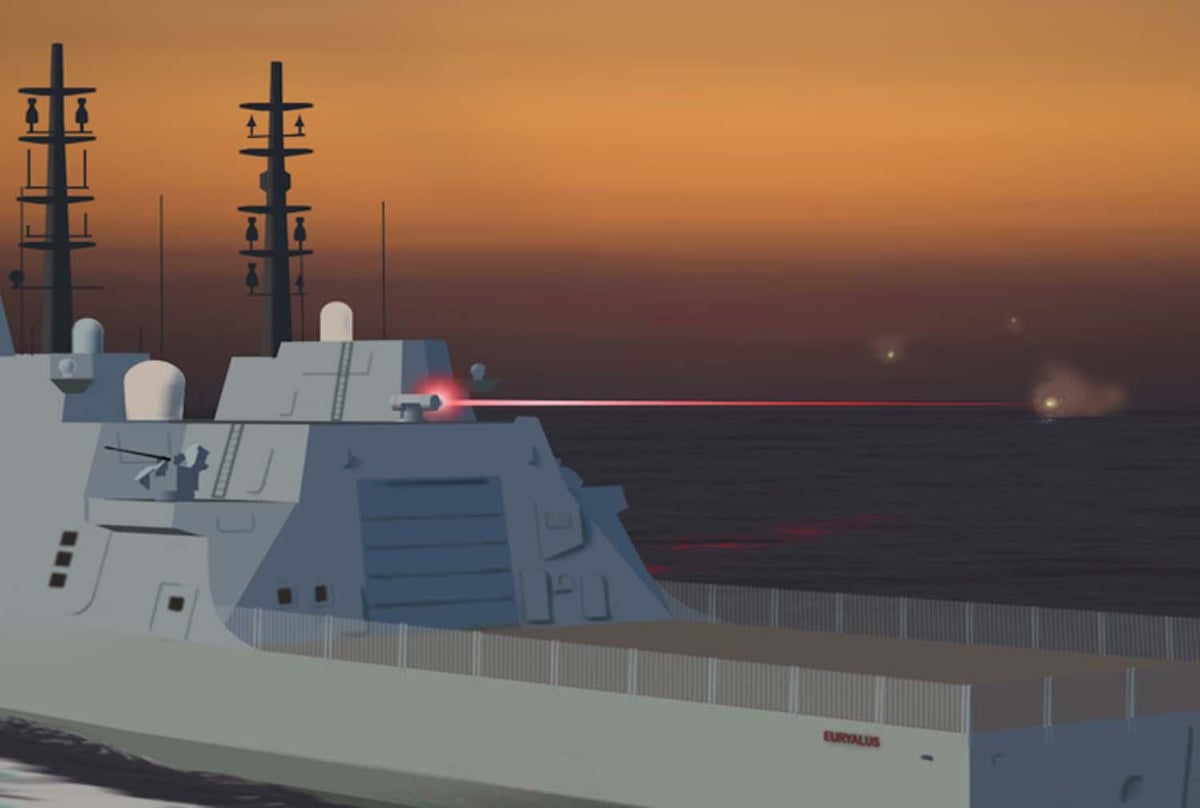 The £130m Dragonfire programme is one of the most advanced weapons systems currently being tested by the British military.

The ‘death ray’ will be capable of firing bursts of high-energy light particles that can rip apart targets in the blink of an eye.

It’s set to be rolled out across the UK armed forces, fitted on Royal Navy warships, RAF jets, helicopters and in land-based air defence variants.

An impression of the laser weapon in action on a Type 26 frigate.

Development of Dragonfire is being led by a consortium of international defence firms and the Ministry of Defence.

The first batch of trials has now been completed, which tested the accuracy of a low-powered version of the laser against targets in the air and at sea – with the consortium behind the project saying Dragonfire passed with flying colours with ‘exceptionally high accuracy’.

The success has now paved the way for the next phase of the trials, which will see the UK tested its first high-power laser version.

The Dragonfire system which has now completed its first set of accuracy tests on targets in the air and at sea.

Chris Allam, managing director of defence firm MBDA UK, said: ‘The success of these trials is a key step in the development of sovereign laser directed energy weapons.

‘It is the culmination of a lot of hard work from both the industry and Dstl (Defence Science and Technology Laboratory) teams, overcoming disruption due to Covid and technical challenges from the use of unique innovations in Dragonfire that are testing the very limits of what is physically possible in the laser weapons domain.’

Dragonfire was revealed in 2017, with the then-Second Sea Lord of the Royal Navy, Vice Admiral Jonathan Woodcock championing the system.

Addressing senior military figures and defence leaders during his 2017 Trafalgar Day speech, Vice Adm Woodcock said it had been hoped the first ‘capability demonstrator’ of the system would ‘fire in 2019’.

An impression of the laser system fitted on a Wildcat helicopter.

But delays hampered this plan, pushing back the planned rollout into the army and navy by the mid-2020s.

Speaking on Twitter today about the news of Dragonfire’s first tests, Sir Jonathan said: ‘Great to see but such a shame it’s not 2019, the date I set for it to be trialled at sea and the date signed up to by the consortium.’