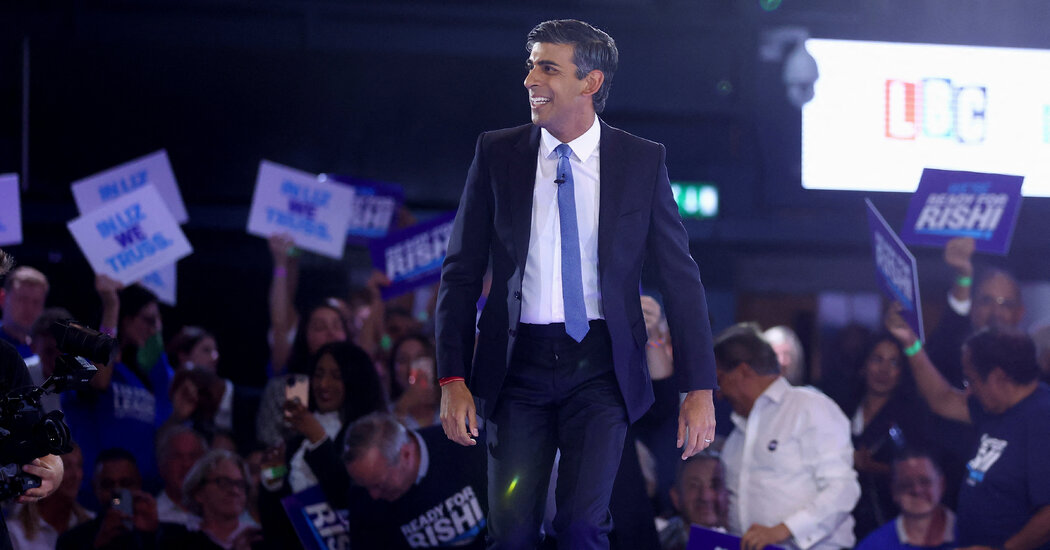 Mr. Sunak’s warnings about inflation and his fiscal conservatism may have cost him the post in September. But now his accurate assessments are easing his path to Britain’s top job. 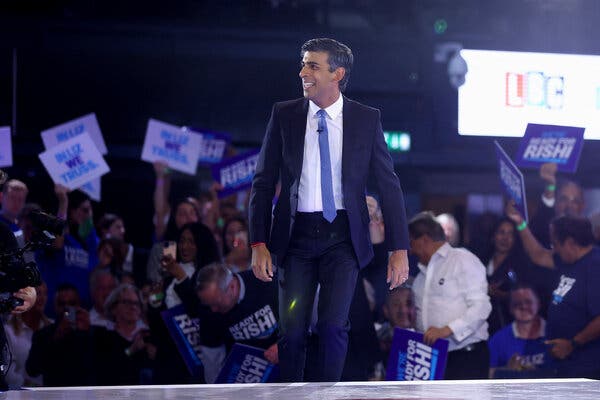 Rishi Sunak at a Conservative Party event in London in August. Credit…Hannah Mckay/Reuters

LONDON — Rishi Sunak would have every right to be smug.

Throughout the summer, Mr. Sunak, Britain’s former finance minister — and now the front-runner for prime minister — warned against the economic policies of Liz Truss as he competed with her for the nation’s top job, and then lost. From the first television debate, when he described her plans as a “fairy tale,” to the final days of the contest, when he said he “struggled to see” how Ms. Truss’s tax cuts and spending plans would “add up,” he sounded the alarm.

For the past six weeks, Mr. Sunak has been lying low as his economic predictions have played out at a dizzying speed. Investors balked at Ms. Truss’s widespread tax cuts and increased borrowing; the pound slumped; government borrowing costs soared; the mortgage market was upended; and the central bank had to intervene. After just 44 days as prime minister, Ms. Truss resigned last week with her economic agenda in tatters.

Mr. Sunak’s relatively gloomy attitude over the summer, warnings about inflation and strict adherence to fiscal conservatism may have cost him the opportunity to be named prime minister in September. But less than two months later, these same characteristics and accurate prognosis of the effects of Ms. Truss’s program have eased his pathway to Britain’s top job.

After Boris Johnson, the former prime minister, took himself out of the running on Sunday, Mr. Sunak has cemented his commanding lead in the contest.

“He clearly comes with the huge advantage” of being able to say everyone was warned, said Jill Rutter, a former civil servant and a senior fellow at the Institute for Government, a London-based research group.

Liz Truss and Mr. Sunak in early September before a BBC interview as each sought to become Britain’s next prime minister.Credit…Jeff Overs/BBC via Agence France-Presse/ Getty Images

On Sunday, Mr. Sunak, 42, formally declared that he was running to be the leader of the Conservative Party and, by extension, the next prime minister. He is the front-runner in the number of members of Parliament who have publicly committed to him, ahead of the leader of the House of Commons, Penny Mordaunt.

“The United Kingdom is a great country, but we face a profound economic crisis,” Mr. Sunak said in a statement on Sunday, announcing that he was running. He added that he wanted to “fix our economy” and that he had a track record of delivery.

Mr. Sunak’s office declined a request for an interview on Sunday evening after Mr. Johnson’s withdrawal. But, in a tweet, Mr. Sunak praised Mr. Johnson for Brexit and the coronavirus vaccine rollout.

“I truly hope he continues to contribute to public life at home and abroad,” Mr. Sunak added.

Mr. Sunak’s rise in politics has been uncommonly rapid. In early 2020, at just 39 years old, he was catapulted into the position of chancellor of the Exchequer, in Britain’s treasury department, by Mr. Johnson. He has held a seat in Parliament only since 2015. Mr. Sunak became the nation’s most popular politician after spending hundreds of billions of pounds on emergency pandemic measures, including paying people’s wages and arranging generous grant and loan programs for businesses.

For a long time Mr. Sunak was considered Mr. Johnson’s heir apparent. But then his political star suddenly started to fall earlier this year.

His efforts to shrink the vast pandemic-era public spending were met with a drop in popularity and policy U-turns. In March, as inflation started to bite in Britain and fears grew over a cost-of-living crisis, Mr. Sunak announced only limited support to help vulnerable households. Two months later, he came up with a more generous plan that offered every household hundreds of pounds in discounts off energy bills.

The criticism of Mr. Sunak has been intensified by his wealth. Photographs of him wearing designer clothes and using “smart” coffee mugs that cost hundreds of dollars and revelations that he owned a Peloton exercise bike have created an image of someone who is out of touch with a population squeezed by the highest inflation rate in four decades.

While his Indian heritage shows the Conservative Party’s progress in diversifying its ranks, and would make him Britain’s first prime minister who was not white, Mr. Sunak has many of the traditional trappings of a Tory upbringing. He went to the fee-paying Winchester School and studied philosophy, politics and economics at Oxford University. He worked at the investment bank Goldman Sachs and two hedge funds before becoming a member of Parliament.

Mr. Sunak with his wife, Akshata Murthy, and their daughters, Anoushka and Krishna, in July.Credit…Peter Nicholls/Reuters

While studying for an M.B.A. at Stanford University, he met his wife, Akshata Murthy, a fashion designer whose father, Narayana Murthy, co-founded the technology giant Infosys and is one of India’s richest men. They have homes in London, in Mr. Sunak’s parliamentary constituency in Yorkshire and in Santa Monica, Calif., and were featured this year in The Sunday Times’s annual ranking of Britain’s wealthiest people.

In April, the revelation that Mr. Sunak’s wife claimed nondomiciled status in Britain — saving her millions of pounds a year in taxes on dividends from shares in her father’s company — suddenly put Mr. Sunak’s political future in doubt, and he had to beat back calls for his resignation.

It also emerged that he had retained a U.S. green card, which would allow him to live permanently in the United States, even while he was chancellor. Mr. Sunak gave up the green card last October, and in the spring his wife said she would pay taxes in Britain on her overseas income.

But Mr. Sunak’s wealth is likely to remain a political vulnerability for him, said Ms. Rutter, the senior fellow.

Wealth is “always going to be the difficulty for Sunak,” she said, “if he comes in and says we all have to make sacrifices.”

If he becomes prime minister, it is likely that Mr. Sunak will preside over spending cuts to government departments with already stretched budgets. Jeremy Hunt, the current chancellor, has warned of “difficult” spending decisions as he has tried to repair the damage to Britain’s fiscal credibility caused by Ms. Truss’s tax plan.

Though Mr. Sunak, as prime minister, would not be obligated to keep Mr. Hunt in that role, it would be risky for any new leader to deviate sharply from the fiscal plans that have brought some calm to British financial markets.

As chancellor, Mr. Sunak raised taxes as a share of national income to their highest level in 70 years, a record he had to defend over the summer. He contrasted his pragmatic approach to public finances with Ms. Truss’s more carefree policy of not offsetting tax cuts with spending cuts or other plans to avoid increasing public debt.

“Liz’s plans are promising the earth to everybody,” he told the BBC in August. “I don’t think life’s that simple, and I think her plan risks making the situation worse when you’re borrowing that much money for tax cuts at a time when inflation’s already going up.”

In the end, several of Mr. Sunak’s policies from his time as chancellor are still intact, such as a plan to raise corporate taxes to 25 percent from 19 percent, and to keep the basic rate of income tax, at 20 percent.

Mr. Sunak has said that he wants to cut taxes but that inflation needs to come down first. As chancellor, his efforts to see to fruition a grander economic vision were scuppered by crisis, particularly Russia’s war in Ukraine.

In February, at a speech at City, University of London, Mr. Sunak said he wanted to build a “new culture of enterprise” and an economy focused on “free market principles.” In this vision, more government spending was not the answer to fixing Britain’s lackluster productivity growth. Private business investment was paramount. But just a few months later, he was announcing big spending plans to protect households from rising energy bills.

Mr. Sunak may have steered the British economy through more than two years of crisis, but Britain’s next prime minister faces enormous economic challenges.

The nation is likely to enter a recession and longstanding issues include low productivity growth and trade and labor market disruptions created by Brexit. Mr. Sunak also has political problems. His resignation was the tipping point in Mr. Johnson’s downfall in July, which means there are many in the party in Parliament and in the broader membership who will struggle to get behind him.

Mr. Sunak, or whoever the next prime minister is, will be caught between a rock and a hard place. On one side is an unruly and fractious Conservative Party and on the other side financial markets that expect strict discipline on public finances.

“It will take an immensely skillful politician to navigate their way through this,” Ms. Rutter said. “The really interesting question is, is Rishi Sunak skillful enough?”

Boris Johnson, then the prime minister, with Mr. Sunak, in 2020. Credit…Dan Kitwood/Getty Images