When Ukrainian President Volodymyr Zelenskiy addressed his nation after Russia said it planned to withdraw its forces from the west bank of the River Dnipro in southern Ukraine he betrayed few signs of relief.

Besides suspecting that Russia may be laying a trap for his forces, his downbeat demeanour on Wednesday evening may reflect what Western military and diplomatic sources say looks like a bittersweet moment for Kyiv.

If it happens, the planned retreat could make life easier for the Russian army, in some respects, and harder for Ukraine.

“On the one hand, this is obviously a Ukrainian victory and a sign of big weakness on Russia’s part,” said Konrad Muzyka, a Polish military analyst who recently returned from Ukraine.

The withdrawal would bring Ukrainian forces closer to Crimea, the Black Sea peninsula that Moscow annexed in 2014 and which Kyiv says it aims to retake, and would appear to end Russian dreams of extending a contiguous land corridor westward to other Ukrainian coastal cities or to Moldova.

But Muzyka said falling back was also the only right military decision for Russia to take because its forces on the western side of the Dnipro were too exposed, over-stretched and under-supplied, a position he called unsustainable.

“If the Russians withdraw now, not only will they have more forces to prepare the defences of the eastern bank of the river, but they will also have some forces to actually move around and deploy to other areas (of Ukraine),” he said, saying it could take weeks for Moscow to complete its withdrawal.

Ben Barry, a senior fellow for land warfare at the International Institute for Strategic Studies in London, noted what he called an element of “realism” in Russia’s strategy following the appointment last month of a new overall Russian commander in Ukraine, General Sergei Surovikin.

“It’s definitely a turning point, but it doesn’t mean that Russia has lost or that Ukraine has won,” said Barry, who said Moscow was still capable of taking the initiative if it could regroup for a fresh offensive or mount decisive counterattacks.

“It is far too soon to write them off.”

The choreographed and blunt way that Russia announced its plans to retreat contrasted sharply with the way it presented its two big earlier reversals – its flight from Kyiv in March and from the Kharkiv region in the north-east in September.

Back then, the defence ministry spoke of “goodwill gestures” and of tactical “regroupings” after its forces had been beaten back.

This time, the announcement was made on state TV by a depressed-looking Sergei Shoigu, the defence minister, and the plain-speaking Surovikin, and while Russia still held the territory it said it planned to cede, albeit under pressure.

Both men publicly accepted that Russia’s position in Kherson had become untenable.

President Vladimir Putin, Russia’s commander-in-chief, was conspicuous by his absence, a move that some analysts said was designed to distance him from a difficult decision that the Kremlin had decided the military should own.

Regardless of any potential military upside, retreat would represent a humiliating defeat for Russia’s political and military leadership.

The withdrawal, the latest sign that what Moscow calls its “Special Military Operation” is faltering badly, would mean handing back the city of Kherson, founded during the Russian Empire era by Empress Catherine the Great.

Kherson is the first and only regional capital Moscow’s forces have captured, at great cost, since their Feb. 24 invasion. Not long ago it was plastered with billboards proclaiming it would be with Russia forever after Putin announced he had annexed Kherson and three other regions.

Getting its troops – estimated to number some 30,000 men – back to the eastern bank of the Dnipro will not be easy for Russia either, given Ukraine has damaged or destroyed all the bridges across it, forcing Moscow to rely on night-time ferries in range of Ukrainian rockets.

For now, it’s unclear how and when Russia will conduct any fall back and what price it will try to extract in the process from Ukraine, which fears retaking a booby-trapped city and the possible blowing up of a dam on the Dnipro.

But if Russian forces do make it to the eastern bank largely intact with some of their hardware, they would be able to use the natural barrier of the river to dig in on a side, where they have already dug trenches, while keeping the city of Kherson in range of their own artillery.

The dearth of any safe working bridges able to transport military hardware would then become Ukraine’s problem.

Muzyka and Barry both said that falling back to the eastern side of the Dnipro would allow Russia to shorten the frontline it has to defend and to free up more troops.

Anthony Brenton, Britain’s former ambassador to Moscow, said Russia had prepared the ground for an eventual retreat from the Dnipro’s west bank for some time and that it clearly hoped to buy time to try to regroup over the winter.

“It’s a rational thing to do as Kherson was no longer defensible. The Russians are still gambling on getting themselves together militarily” by the end of the winter, he said.

Despite all their setbacks, Brenton said he thought the Russians still hoped to hang on to Crimea – which he said Moscow cared about most – along with the land corridor they have carved out connecting it with Russia and continued access to Ukrainian water needed for Crimea, plus as much as the Donbas part of eastern Ukraine “as they could grab”.

“I suspect that at the top they would quite like an outcome that leaves them roughly where they are, which they’re not going to get,” said Brenton, who said he believed the Russians understood that they would ultimately need to strike a deal even if such a prospect seemed remote for now. 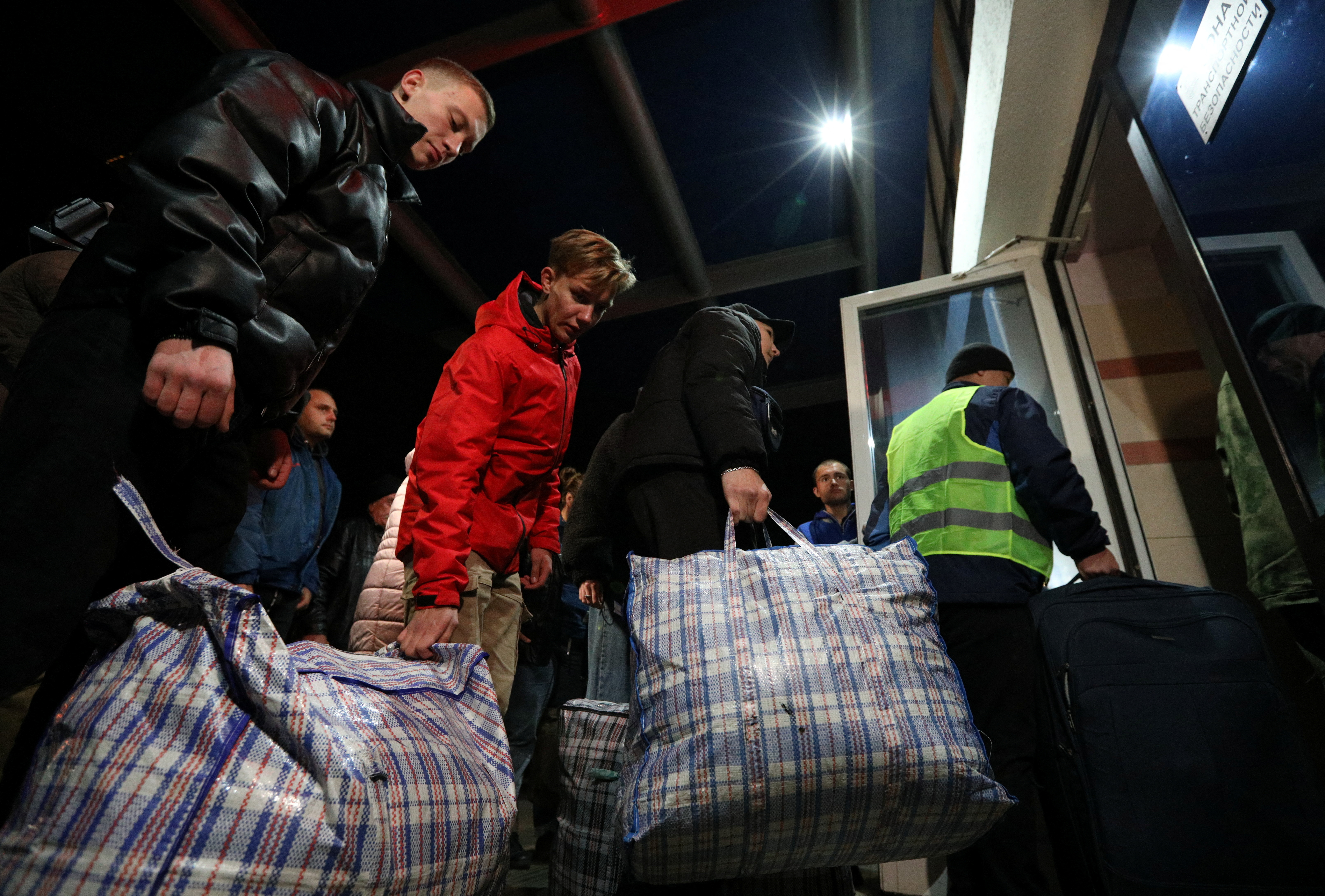 Civilians evacuated from the Russian-controlled part of Kherson region of Ukraine arrive at a local railway station in the town of Dzhankoi, Crimea November 10, 2022. REUTERS/Alexey Pavlishak 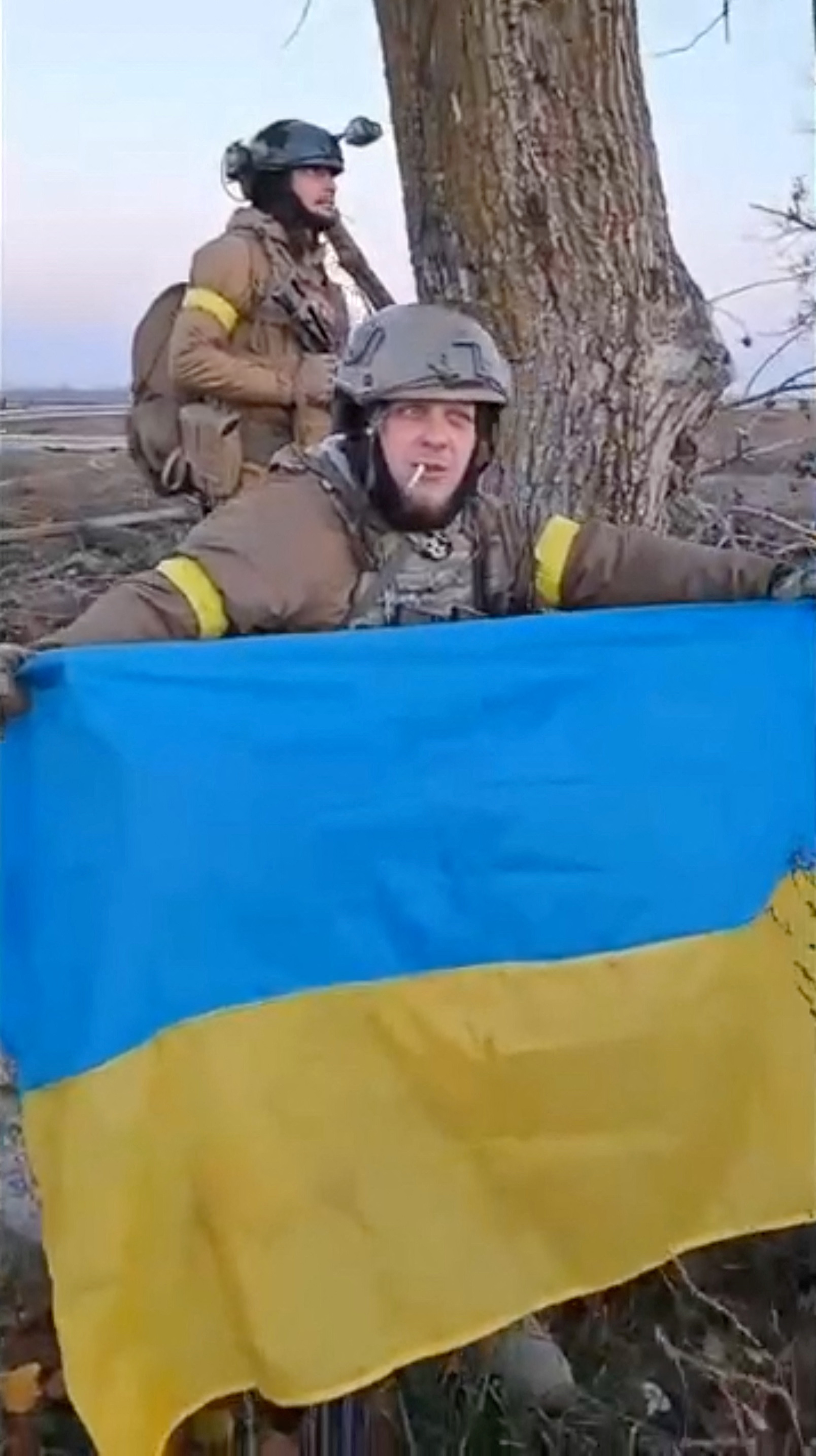 Ukrainian soldiers from the 28th brigade say that they advance towards Kherson in South-east of Posad-Pokrovske, Kherson Oblast, Ukraine November 10, 2022 in this screen grab obtained from a video. Video obtained by Reuters/Handout via REUTERS