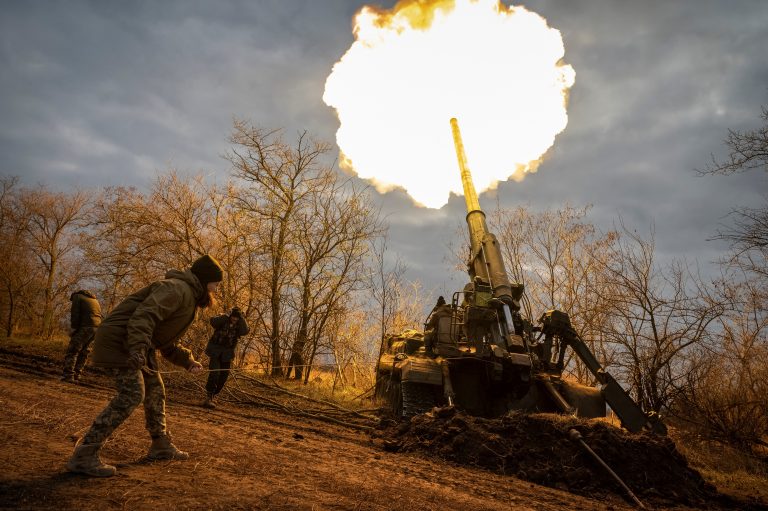 By Tom Balmforth and Jonathan Landay

KYIV/NOVOOLEXANDRIVKA, Ukraine (Reuters)—Russian Defense Minister Sergei Shoigu on Wednesday ordered his troops to withdraw from the west bank of the Dnipro River in the face of Ukrainian attacks near the southern city of Kherson, a significant retreat and potential turning point in the war.

Ukraine reacted with caution to the announcement, saying some Russian forces were still in Kherson.

“Until the Ukrainian flag is flying over Kherson, it makes no sense to talk about a Russian withdrawal,” Mykhailo Podolyak, a senior adviser to Ukrainian President Volodymyr Zelensky, said in a statement to Reuters.

Kherson city was the only regional capital Russia had captured since its invasion in February and the abandonment of such a strategic prize would be a major setback for what Moscow terms its “special military operation” in Ukraine.

In televised comments, General Sergei Surovikin, in overall command of the war, reported to Shoigu that it was no longer possible to supply Kherson city. He said he proposed to take up defensive lines on the eastern bank of the Dnipro River.

Shoigu told Surovikin: “I agree with your conclusions and proposals. For us, the life and health of Russian servicemen is always a priority. We must also take into account the threats to the civilian population.

“Proceed with the withdrawal of troops and take all measures to ensure the safe transfer of personnel, weapons and equipment across the Dnipro River.”

The news followed weeks of Ukrainian advances towards the city and a race by Russia to relocate tens of thousands of its residents.

“We will save the lives of our soldiers and fighting capacity of our units. Keeping them on the right (western) bank is futile. Some of them can be used on other fronts,” Surovikin said.

Kherson is the main city of the region of the same name – one of four Ukrainian regions that President Vladimir Putin proclaimed in September he was incorporating into Russia “for ever”, and which the Kremlin said had now been placed under Moscow’s nuclear umbrella.

NATO’s Secretary General Jens Stoltenberg, on a visit to London, welcomed the “encouraging” news from Kherson, and noted the substantial military help the alliance was providing to Kyiv.

“The victories, the gains the Ukrainian armed forces are making belongs to the brave, courageous Ukrainian soldiers but of course the support they receive from the United Kingdom, from NATO allies and partners is also essential,” said Stoltenberg.

Compounding the sense of Russian disarray in Kherson, Moscow’s number two official there, Kirill Stremousov, was killed on Wednesday in what Moscow said was a car crash.

Stremousov was one of the most prominent faces of Russia’s occupation. Ukraine viewed him as a collaborator and a traitor.

In a video statement only hours before his death, Stremousov denounced what he called Ukrainian “Nazis” and said the Russian military was in “full control” of the situation in the south.

However, there has been mounting speculation in recent weeks that Moscow could either withdraw its forces from the west bank of the Dnipro or dig in for a bloody battle.

Earlier on Wednesday, the main bridge on a road out of Kherson city was blown up.

Photos on the internet showed the span of the Darivka bridge on the main highway east out of Kherson completely collapsed into the water of the Inhulets River, a tributary of the Dnipro. Reuters verified the location of the images.

Ukrainians who posted photos of the destroyed bridge speculated that it had been blown up by Russian troops in preparation for a retreat.

Vitaly Kim, the Ukrainian governor of the Mykolaiv region, which borders Kherson, suggested Ukrainian forces had pushed some Russians out.

“Russian troops are complaining that they have already been thrown out of there,” Kim said in a statement on his Telegram channel.

The pullout announcement had been anticipated by Russia’s influential war bloggers, who described it as a bitter blow.

“Apparently we will leave the city, no matter how painful it is to write about it now,” said the War Gonzo blog, which has more than 1.3 million subscribers on Telegram.

“In simple terms, Kherson can’t be held with bare hands,” it said. “Yes, this is a black page in the history of the Russian army. Of the Russian state. A tragic page.”

Further east, in Novoolexandrivka, a village on a hilly bank of the Dnipro in territory recaptured by advancing Ukrainian troops last month, the thunder of near constant rocket and artillery fire echoed on Wednesday from the front 10 km (6 miles) away.

“We’re kicking them off this bank and we will kick them off the other bank,” said Oleh, a Ukrainian soldier.

Since pulling out, the Russians have pounded the area every day, villagers and soldiers said. Around a third of residents, some 230 people, have stayed behind.

“They won’t let me die in peace. I want to be able to die in peace at the end of my life,” complained Mariia Lytvynova, 92, as she leant on a walking stick under a trellised archway hung with vines ripe with red grapes leading to her small home.

“I have already survived one war,” she said, referring to World War II, when the region was occupied by Nazi Germany.

“What will happen with the young people? I am done with my life. But they have to carry on.”