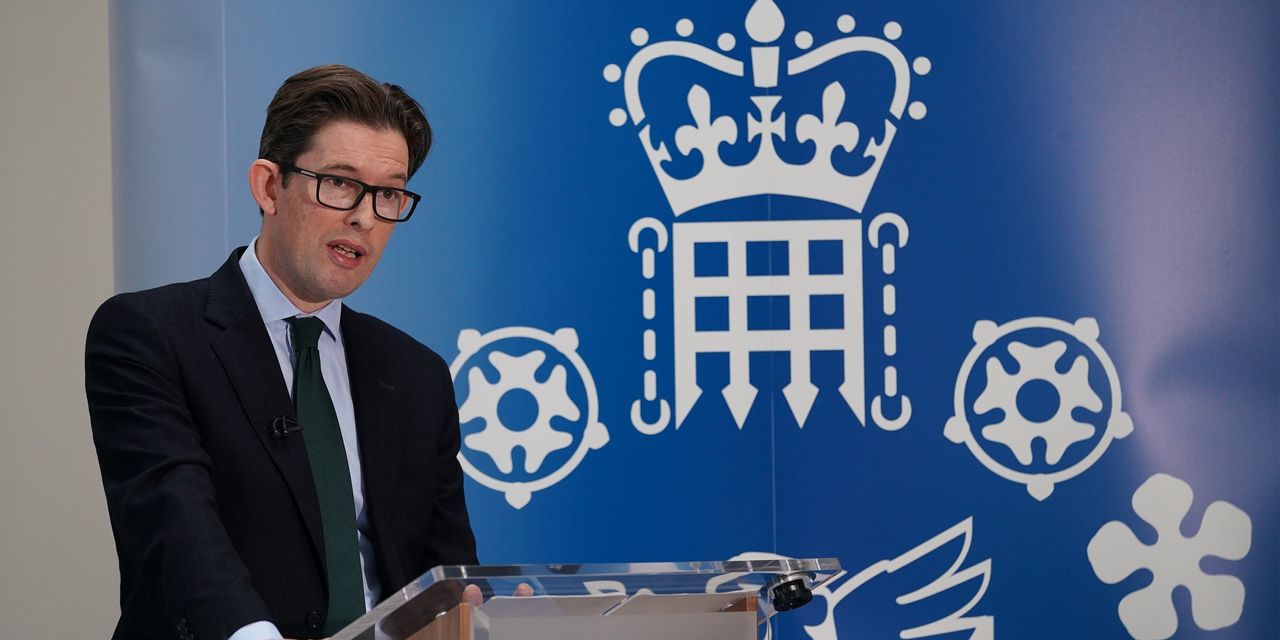 LONDON—The mass expulsion of more than 400 Russian spies from Europe in the wake of the war in Ukraine has deeply damaged Russia’s ability to launch covert operations on the continent, the U.K.’s domestic-intelligence chief said Wednesday.

In an annual speech outlining the threats Britain faces, MI5 Director General Ken McCallum said the decision in recent months by several European nations to expel some 600 Russian officials—at least 400 of whom the U.K. intelligence services considered to be spies—has “struck the most significant strategic blow against the Russian intelligence services in recent European history.”

Since the invasion of Ukraine in February, numerous European countries including Germany and Ireland have thrown out Russian diplomats suspected of being linked to covert activities.

A personal, guided tour to the best scoops and stories every day in The Wall Street Journal.

The U.K., which expelled 23 Russian diplomats after accusing the Kremlin of poisoning a former spy on U.K. soil back in 2018, has since refused visas to more than 100 Russian diplomats to stop them restocking their spy ranks in Britain, said Mr. McCallum. He added that these and other European expulsions would leave “a very large dent in the Russians’ covert positioning across Europe.”

The British spy chief warned that Russia is just one of myriad challenges Britain faces from nations including China and Iran. He warned that the Iranian regime’s attempt to contain unrest in its country had resulted in an increased attempt by its intelligence services to kidnap or kill dissidents abroad. MI5 says it has disrupted at least 10 such threats in the U.K. since January.

China, meanwhile, continues to pose a longer-term threat, as it builds influence among lawmakers and others in British society to manipulate opinion in China’s favor, the agency warned. MI5 warned that China has also stepped up its repression of dissidents based in the U.K, he said, most notably when Chinese consular staff in Manchester, England, were recently filmed pulling a protester onto its grounds and beating him.

Other threats have dimmed a little. Islamist terrorism still makes up three-quarters of MI5’s terrorism-related caseload, he said. However, the scale of threat posed by Islamic State and al Qaeda has diminished compared with a few years ago, following military setbacks experienced by both organizations, said Mr. McCallum. But their activities continue to inspire others to attempt terrorist attacks. The spy agency has disrupted eight possible terrorist attacks in the U.K. since last year, but Mr. MacCullum declined to say how many were linked to Islamist terrorism.

The war in Ukraine has seen MI5’s attention shift back to Russia, with the war “raising national security questions some thought consigned to the history books,” Mr. McCallum said.

Over recent years, Russia stands accused of carrying out numerous operations on European soil, from a chemical-weapons attack on a former Russian spy in Britain to the murder of a Chechen dissident in Berlin. European officials have also accused Russia of carrying out disinformation campaigns over the Ukraine war and of attempted interference in several European elections in recent years.

Following the invasion, intelligence agencies across the continent have shared information to weed out potential spies. In July, Richard Moore, the head of Britain’s foreign spy agency MI6, said that roughly half of all Russian spies operating under diplomatic cover in Europe had been expelled.

The MI5 boss declined to comment on what covert Russian operations had occurred in the U.K. since February but said there hadn’t been many.

Despite the expulsions, Mr. McCallum said, Russia still posed an important cyber threat. It also still has undercover agents operating across Europe. Mr. McCallum pointed to a case in Norway, where the domestic-security agency said recently it had arrested a man suspected of spying for Russia while posing as an academic from Brazil about 700 miles north of the capital, Oslo.

In June, a Russian spy tried to secure an internship at the International Criminal Court under the guise of being a Brazilian citizen, according to Dutch intelligence.

“The U.K. must be ready for Russian aggression for years to come,” Mr. McCallum said.

Write to Max Colchester at Max.Colchester@wsj.com