U.S. Customs and Border Protection (CBP) are actively monitoring ports of entry along the U.S.-Canada border for the white Hyundai Elantra that was seen near the scene of the quadruple homicide of four University of Idaho students in Moscow, Idaho, last month.

“Our ports of entry in the area are aware of the vehicle and will be keeping an eye out for it,” a CBP spokesperson told Newsweek on Friday morning.

On Wednesday, the Moscow Police Department announced that it was looking to speak with the occupant(s) of a “white 2011-2013 Hyundai Elantra, with an unknown license plate.” According to police, the vehicle was seen in the “early morning hours of November 13th” near the Kings Road residence where Kaylee Goncalves, 21, Madison Mogen, 21, Ethan Chapin, 20, and Xana Kernodle, 20, were fatally stabbed in their beds in an off-campus residence. 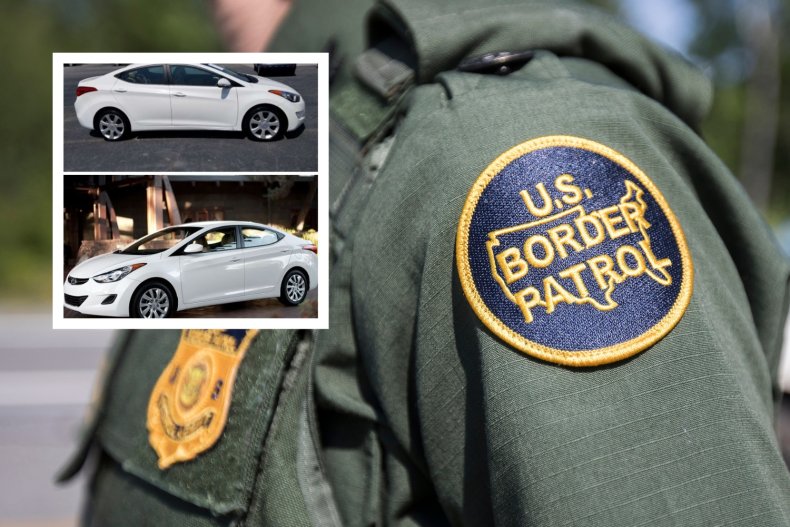 Above, a U.S. Border Patrol agent is seen, inset image is the type of car police are looking for. U.S. Customs and Border Protection (CBP) are actively monitoring ports of entry along the U.S.-Canada border for the white Hyundai Elantra that was seen near the scene of the quadruple homicide of four University of Idaho students in Moscow, Idaho, last month.
Scott Eisen/Getty; Moscow Police Department

A spokesperson for the Idaho State Police told Newsweek Friday that the Moscow Police Department did not specifically request assistance from CBP, but added that since the information about the car went out to the public, border officials may have decided to keep an eye out for the vehicle on their own.

Kenneth Mains, a former law enforcement official and founder of the American Investigative Society of Cold Cases (AISOCC) previously spoke to Newsweek about the vehicle and said, “For police to release this information means it holds potential significant value to the investigation. Maybe not the suspect but potentially a witness.”

However, following the news of CBP monitoring ports of entry for the vehicle, Mains told Newsweek on Friday that “the occupant(s) of that car could be more than just a witness based on this action by investigators.”

“I think investigators are being as thorough as possible in order to find that vehicle of interest—especially considering that the Canadian border is close to Moscow. I have seen this investigative lead in other cases—whether its the Canadian border and/or the Mexican border. Investigators have to be thorough and that means international leads have to be followed up at the borders,” O’Toole said Friday.

Since the homicides occurred nearly a month ago, police have continued to investigate all aspects of the case, although they have been unable to identify a suspect or person of interest in the crime. Police have also said that they are speaking with local retailers to see if any individual had purchased a fixed-blade style hunting knife that was believed to be used in the killings.